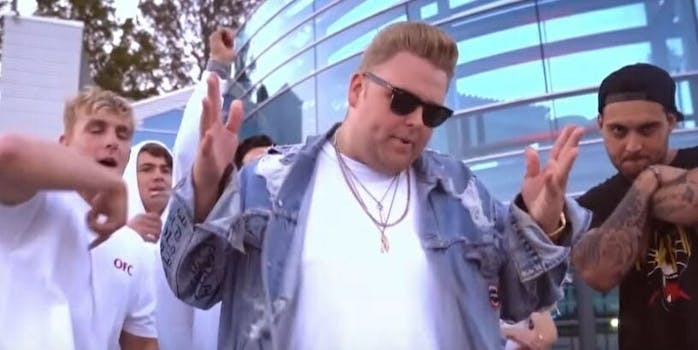 Is Jake Paul’s dad breaking up his superteam of YouTube bros?

The drama is building.

Ever since former Team 10 Chief Operating Officer Nick Crompton announced he was leaving Jake Paul’s YouTube incubator group last week, rumors have swirled around the internet that a major source of drama was Paul’s father.

Crompton seemed to confirm that in a tweet on Thursday.

A few days after Crompton’s departure—which was then exacerbated by the decision of two others to leave Team 10, Chance Sutton and one of the group’s engineers—Greg Paul tweeted this.

Almost immediately, Crompton—who, aside from a pleasantly-worded statement released last week detailing that he was leaving Team 10 due to creative differences—responded in a harsh tone.

Wrote Crompton, who has 480,000 YouTube subscribers: “But nobody had an issue with you auditing? People had issue with being verbally abused, watching their coworkers be fired around them and not being kept in the loop. Business 101, communication. Everytime you publicly post to try make myself or the team look bad, I will respond.”

But nobody had an issue with you auditing? People had issue with being verbally abused, watching their coworkers be fired around them and not being kept in the loop. Business 101, communication. Everytime you publicly post to try make myself or the team look bad, I will respond. https://t.co/Pif3Us4Shi

YouTube gossip reporter Keemstar said on a recent episode of his DramaAlert series that he had heard rumors that Greg Paul had taken over and was trying to merge the businesses run by Jake Paul and his older brother Logan Paul.

Crompton did not immediately respond to a Daily Dot request for further comment.

Last week, Crompton—who had been best known for declaring that “England is my city” in a Jake Paul rap video—resigned and in a tweet said, “Due to internal changes being made within our various businesses that I don’t agree with, I have resigned both as Chief Operations Officer and as talent. I still love my Team 10 family but the vision for the business, people involved and direction it’s now going in, no longer makes sense to me.”

It's time to move on from Team 10. pic.twitter.com/8CrDcOTzmH

Team 10 responded to his resignation in a statement that, in part, read: “Team 10 will never allow one individual to negatively influence or undermine the team’s collective vision, but if it begins to happen in any capacity, the situation will immediately be corrected to protect the community we’ve all worked so hard to build and protect.”

Jake Paul hasn’t publicly commented on any of the Team 10 turmoil in recent days, though he did say on one of his recent vlogs that he was getting a sword tattooed on his back, because “I’ve been stabbed in the back so many times.”