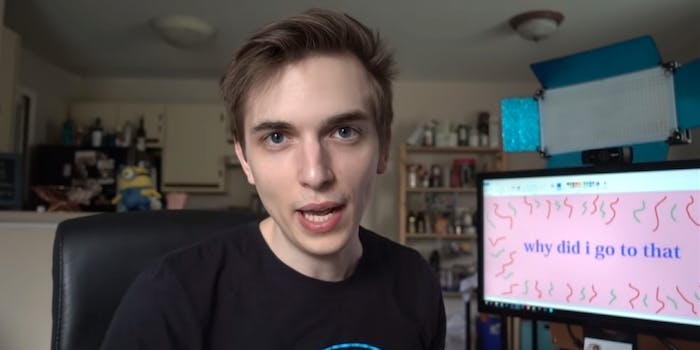 YouTuber documents the unique hell of a Jake Paul show

Drew Gooden set out to figure out why and how Paul exists—and was left with more questions.

What’s a Jake Paul concert like? Well, one Daily Dot writer recently spent at least two hours in San Antonio trying to figure that out, calling the spectacle “the YouTube version of vaudeville.”

YouTuber Drew Gooden also wanted to find out what the fuss was all about. After purchasing general admission passes (VIP packages start at $1,000) and heading to the House of Blues in Orlando, Florida (which looks like a Disney ride), Gooden documented the scene, from the warm-up DJ asking the crowd to like his Facebook page and to the rich-kid openers who sing about being rich. The Jake Paul portion is full of terrible sketches and dancing. It’s bad, as we noted in our scene report, but Gooden gives it a nature-documentary feel.

Still, Gooden asks himself why he spent money (for the second time) on something he knew would be bad. Is the joke actually on him? Do the kids and parents know it’s bad and don’t care? The question “How the fuck did we get here?” is never really answered, but getting to see the Team 10 factory is illuminating—in that it illuminates a barren part of YouTube culture that doesn’t appear to stand for anything except bragging rights and percentages.