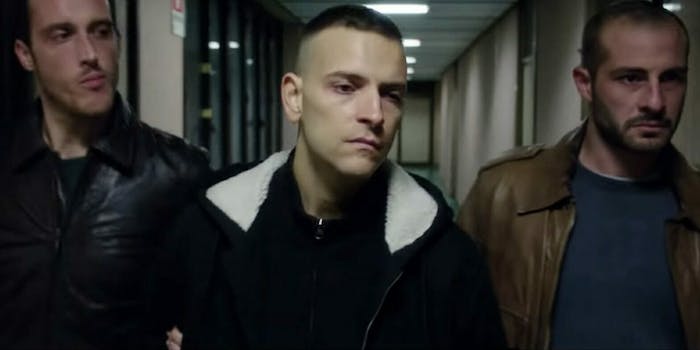 Netflix’s ‘On My Skin’ confronts police brutality in Italy

The film tackles a tragedy but fails to indict the system.

Fresh off its premiere at the Venice Film Festival, On My Skin arrives stateside on Netflix. It’s an Italian film about the infamous case of Stefano Cucchi. On Oct. 15, 2009, Stefano was arrested on a minor drug charge. He was taken into custody by the Carabinieri and a week later Stefano died. Stefano’s case made waves in Italy and was the subject of multiple trials in an attempt to understand what happened. Whether it’s Italy or the United States, or anywhere else, police brutality knows no borders. On My Skin is set up to be a movie of the moment, for the moment. Instead, it is frustratingly thin. Director Alessio Cremonini is so committed to a straight retelling that the movie falls short—he reads a newspaper story to the audience.

On the night of Stefano’s arrest, the Carabinieri, Italy’s military police, made a routine stop. Stefano goes into custody in good health. By the time he makes it to his jail cell he is bruised and much worse for wear. But he refuses to formally accuse the Carabinieri officers out of fear of retaliation. Between Stefano’s stubbornness and the half-hearted police and medical staff, his condition worsens until his death. On the outside, Stefano’s family gets tangled up in red tape, so they can’t get see him. We watch as Stefano’s health collapses. His case isn’t unique, however. Stefano was Italy’s 148th person to die in police custody in 2009. Cremonini’s focus is so narrow that it forgoes the opportunity to effectively indict the system like a stronger film would.

That last point tied me in knots as I sat down to write this review. I don’t like to judge films for what I think they should be about. I always have the old bit of Roger Ebert wisdom in my head that reminds me to judge films on whether they accomplish what they set out to do. The problem for me is that I can’t figure out the film’s endgame. For most of its runtime, we are right there with Stefano. The only time we aren’t with Stefano is at the most important moment when he suffers his ultimately fatal injuries. It is heavily implied that the Carabinieri officers beat him. We see Stefano and the officers enter a room then the scene fades. This feels like a missed opportunity for On My Skin to take a stand.

Occam’s razor dictates there really is only one explanation for Stefano’s death. He peddles the old “I fell down stairs” excuse to the people he can’t trust, but nobody buys it. On My Skin would hit harder if it took a definitive stand. The only time the film bares its teeth is when a higher-ranking officer tells a subordinate, “I didn’t make the arrest so I’m not responsible if any problems arise.” It’s foreboding and ominous, but it feels real. I wish the movie had more bite to it. The longer the film goes on, the more it feels like it just wants to document an injustice. To that end, the film hits the target. But it feels like beating a game on easy when you have the ammo to tackle a tougher setting.

The film’s closing minutes are what make me want more from On My Skin. After Stefano’s death, we watch as his family gets the news and breaks down. The film ends with a post-script with the number of prisoner deaths in 2009, then some info about the subsequent court cases and the family’s attempts to hold the responsible parties accountable. The film would’ve been more effective had this been worked into the narrative proper.

For all its frustrations, On My Skin is not without its merits. The best thing about On My Skin is lead actor Alessandro Borghi. He makes Stefano’s every movement and wince felt through the screen. The physicality of the performance is astonishing. There is a long stretch where it seems like we’re just watching Stefano sit down and sit up. Because of Borghi, it’s gripping. It’s a shame his efforts aren’t in service of a stronger film. Cremonini’s visual approach to the film is effective. He favors tight shots that highlight Stefano’s entrapment, and the shots narrow as his situation grows direr. Cremonini also wrote the script with Lisa Nur Sultan, but his direction has more conviction than the writing.

So I’m back to Ebert’s guide for reviewing. The dutiful storytelling appears to remain as impartial as possible. As a document of Stefano’s final week, On My Skin accomplishes that. But the filmmakers are too timid with the larger implications of the story. Its flirtations with digging deeper hit cement quickly. If not for Borghi, On My Skin would be forgettable. This is the kind of story that needs to be told, it just needs a louder and bolder voice.