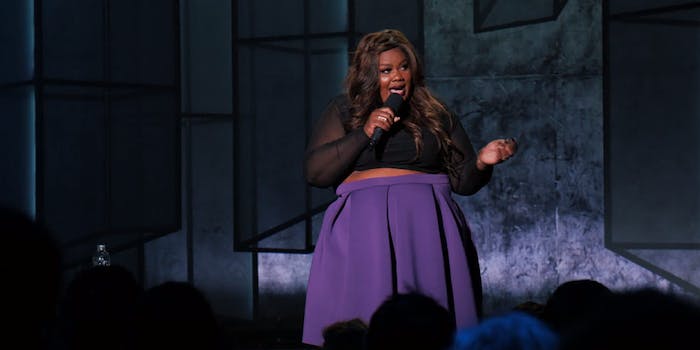 ‘Comedians of the World’ lets you choose your own adventure

'Comedians of the World' is a necessary look at comedy outside our Twitter timelines.

Billed as a “Netflix comedy event,” Comedians of the World spotlights 47 comedians from across the globe, giving a new structure and volume to the company’s mission of curating international comedy.

Comedians of the World

To be fair, it is a lot of content to peruse, but it’s also a necessary look at comedy outside our Twitter timelines, where, at least in the States, we’re still debating Louis C.K.’s latest punch-down, and whether abusive, predatory men deserve stage time. It was with that noise rattling in the back of my brain that I decided to look at the women’s sets first.

Netflix’s biggest success story in 2018 might be Hannah Gadsby’s Nanette, which put the Australian comic in the national conversation. CotW has four comedians from Australia and New Zealand, the standout being Cal Wilson, who turns a crowd-work bit about fears into a bigger discussion about harassment and sexism. Brazilian comedian Mhel Marrer discusses how women are treated in the country, which just elected a far-right president, and segues into a bit about how she came to understand trans women. Her closing line, delivered to her son in an imaginary conversation about him telling her he wants to be a woman, is devastating.

More than a collection of 30-minute sets, CotW is a snapshot of how women are viewed in their respective countries and the experiences they’ve had. The comedians discuss religion, sexism, harassment, anger, motherhood, homosexuality, and gender identity. French comedian Shirley Souagnon discusses racism in France, and the homophobia she experienced when she did a show in Haiti and spoke about being gay.

This is also Netflix’s first collection of comedians from the Middle East. Rawsan Hallak, a comedian from Jordan, discusses body image and the pressure women face to find a husband. Canada’s DeAnne Smith explores identity and the gender binary, telling the audience she prefers to be called “trans-masculine house mouse” or “gentleman elf.” U.S. comedian and Nailed It! host Nicole Byer’s set is almost exclusively about being fat- and sex-positive.

Not to diminish the men: The majority of Mexican standup Franco Escamilla’s set is about his dog trying to impregnate another dog, but he manages to structure and shape it in a relatable and universal way. The U.K.’s Nish Kumar addresses why being called a “left-wing comedian” isn’t an issue, especially when board games like Monopoly are teaching kids right-wing values. A couple of the comedians, like India’s Aditi Mittal and America’s Neal Brennan, make return appearances here after their own hourlong Netflix specials.

CotW is quite a feat of organization, and perhaps the goal here is to funnel some of these comedians into longer specials. But it also functions as an important discovery tool.