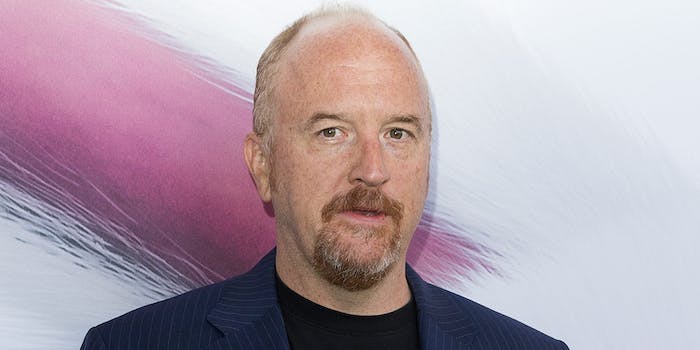 He’s back, now with more bigotry!

A leaked clip of a recent Louis C.K. standup set shows the comedian isn’t working to make amends after being accused of years of sexual misconduct. Instead, he has decided to make fun of LGBTQ people for requesting specific pronouns and mock Parkland shooting survivors.

In the days after the report, C.K. issued a statement, saying that the stories were true and that he thought at the time it was OK because he always asked first. “I have spent my long and lucky career talking and saying anything I want,” he concluded. “I will now step back and take a long time to listen.”

C.K. only took nine months off from the comedy circuit to listen, however, and returned by doing a surprise, drop-in set at the Comedy Cellar in August. He’s continued to perform at the venue, and a clip from his Dec. 28 set is revealing just how much C.K. listened in those nine months, which is apparently not a lot.

In the short audio clip recorded by an audience member, C.K. makes fun of young people for requesting respectful “politically correct” language, like asking to be referred to by specific pronouns, and he even mocked school shooting survivors.

When speaking from the perspective of a person requesting they/them pronouns, he put on a fake lisp, as people often do when they mock gay people.

On the Parkland shooting survivors who testified before Congress, C.K. said, “Fuck you. You’re not interesting because you went to a high school where kids got shot, why does that mean I have to listen to you? How does that make you interesting?”

Although the audience can be heard laughing in the audio clip, the internet is not having any of this “humor” at the expense of shooting survivors and trans people.

Guys, Louie is still working out his material. You have to wait until he’s *perfected* those jokes making fun of children whose friends were murdered

Even the Dictionary stepped up to inform C.K. that he is being foolish.

For Louis CK and others … https://t.co/nQcNSgnd0Q

C.K., once lauded (often by other men) for being a good ally to women, is not the first liberal comedian to do a conservative heel turn after getting called out for sexual misconduct. Aziz Ansari returned to comedy after being accused of forcing himself onto a date, with new material complaining about political correctness. It seems that “liberal” male comedians accused of sexual harassment have an easy way to restart their careers: lean into bigoted alt-right talking points, and voila, you have a new audience.