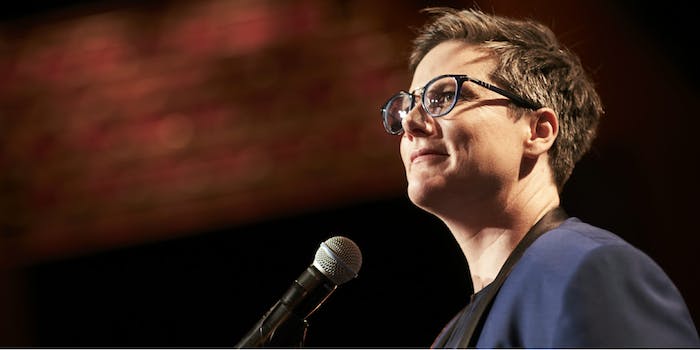 The promo for Nanette, Hannah Gadsby’s new Netflix special, might lead you to believe that another character will appear, or perhaps you’ll hear stories about someone named Nanette. That won’t happen, the Australian comic concedes early on. But by the end of the special, you have reached into a well of past lives and trauma and experience—there are several Gadsbys onstage, even if we just see one.

Recorded at the Sydney Opera House, Nanette, which was already a one-woman show, starts off in a more traditional space. Gadsby discusses growing up gay in mid-’90s Tasmania, where homosexuality was a crime until 1997 and homophobia informed her worldview. She jokes about getting mistaken for a man at age 17 and the Pride flag being “a bit busy.” She talks about her “people” and relates how she got criticism after a show for not having enough “lesbian content.”

“I was onstage the whole time,” she quips.

Gadsby isn’t serving one-liners; she’s often set up arguments and theories or braiding personal and observational. One of the threads of Nanette is that after a decade Gadsby feels it’s time to quit comedy. She’s had to reassess her self-deprecating style, especially as someone who already exists in the “margins.” Is it worth the humiliation to end on a laugh?

But it’s good to reassess, and she uses Bill Cosby to make that point. He was her favorite comedian when she started out, but around this point, Nanette pivots and Gadsby begins breaking down both the oppressive structures of art and the reputation-protecting of famous men accused of being predators, like Cosby, Woody Allen, and Harvey Weinstein. She has an extended bit about Pablo Picasso being a misogynist, and how easily we grant genius to men, replacing the way we defend movies and shows made by predators with “but Cubism.”

Gadsby also examines how comedy has made her push down her own trauma in favor of the punchline. Gadsby was abused as a child, physically assaulted at 17, sexually assaulted in her 20s, and grew up in a place that made her hate herself. Some people can mine those experiences for punchlines; as Gadsby says in the special, “punchlines need trauma.” Is it worth manipulating your story?

In the last 10 minutes or so, Gadsby lets the anger take her, and the audience sits in near-silence. This might seem antithetical to what a comedy show is, but Nanette is revising those parameters, testing the joke structure that rests on setup-punchline, and attacking those ingrained ideas about how comedians must turn pain into jokes. She also calls out the double standard when women go “angry” in comedy versus men.

“There is nothing stronger than a broken woman who has rebuilt herself,” Gadsby says after tearing herself open and telling the story of getting mistaken for a man in full detail. Nanette doesn’t end on a joke or big laugh; this is Gadsby “controlling the tension,” but also her story.