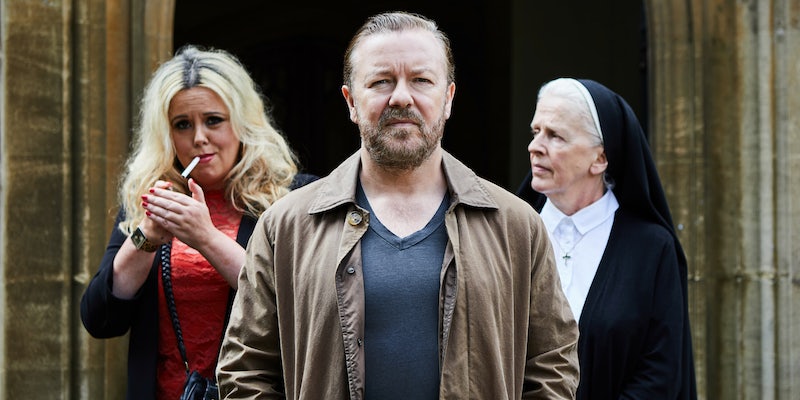 No matter how hard Ricky Gervais tries to portray himself as a callous, boorish iconoclast online, he can’t help but let a little sweetness shine through when it comes to actually making television. On social media and in public life, Gervais has styled himself as an anti-PC truth teller, ranting about how people are easily offended and the number of taboos among the millennial generation. But in his narrative work, Gervais offers something you don’t often see in his public persona: empathy and kindness. From the beginning of his career, this potent combination of bitter jabs at society and underlying kindness has gone a long way.

Gervais’ newest effort, After Life, fits nicely into his existing television oeuvre, but stands in stark contrast to his Twitter timeline. Just as he did with the original version of The Office and Extras, Gervais offers doses of vicious, hilarious cruelty, but only in service of masking his insecurities and dissatisfaction with the world.  As is often the case in Gervais’ work, kindness ultimately prevails in this story of an embittered man in a world that has taken so much from him.

After Life follows Tony (Gervais), a bitter shut-in mourning the passing of his wife Lisa (Kerry Godliman), who recently succumbed to cancer. Not one to be maudlin or melodramatic, Gervais (who writes and directs all six episodes) begins the series with Tony not in the immediate throes of grief, but in that numb period when the pain starts to subside and you’re unsure of what to do next. We meet him as he is just starting to think about getting back out into the world: to work, to dating, to the pub, and all the rest.

As The Office was a study of workplace monotony and Extras was a keen look at stifled ambition, After Life tackles grief. Just as in these previous efforts, Gervais takes an existential pose here. Through Tony, he asks what we owe society after society has taken so much from us. The small-town setting, filled with churches, old-folks homes, and graveyards, lends a more pastoral feel to the proceedings. A melancholy sweetness permeates every episode.

At the beginning of the series, Tony has decided that thanks to the terrible hand life has dealt him, he doesn’t have to care about anyone or anything. Life took away his wife, so why should he play by its rules? But almost immediately, it becomes clear that this approach won’t be sustainable. Tony’s bitterness cracks in the face of the kindness of his loyal dog and pushover brother-in-law Matt (Tony Way) before the pilot reaches its halfway mark. The series is not about how Tony will change his perspective, but when he will decide it’s time to let people back in, even if it means getting hurt again.

Tony’s journey from curmudgeonly shut-in to functioning member of society is nearly emotionally complete by the end of the pilot, after he has a touching encounter with a man who believes the mundane fact that he was sent the same birthday card five times makes him newsworthy. (Tony and his colleagues work for a failing free local newspaper, which leads to many of the season’s best gags.) The rest of the first season is about admitting to the people around him that he wants to re-enter society without berating them with sarcastic comments.

After Life revels in the rude comments that come out of Tony’s misery—this is a Ricky Gervais project, after all. When a coworker innocently asks about Tony’s dreams, he replies, “I don’t have any dreams at the moment because I’m not sleeping. But, even if I did, I wouldn’t tell them to anyone because there is nothing more boring than telling someone a dream you had.” He tells his therapist, “Some people are nice, and the trick is to find who’s nice and who’s an asshole. But assholes pretend to be nice, they pretend to care about you. You’re an asshole.”

Though Tony spends a lot of time taking jabs at his co-workers, family, and strangers who chomp on their potato chips too loudly at the pub, After Life is ultimately a brief, sweet story of a man cautiously reintegrating himself into the world following deep and meaningful pain. While the show sometimes struggles to balance its acerbic wit with the sweetness that can come after sorrow, you can’t help but admire the attempt. Even though the show has fewer jokes and more pensive looks into the distance than we’re used to from Gervais, it never becomes cloying or overwrought.

If there is a knock on After Life, it’s that it moves at a slower pace than Gervais’ previous TV work. This makes sense tonally, but much of Gervais’ charm lies in his rude barbs, and there’s room for fewer of them per minute in a story that requires more contemplative soul-searching than usual. Even if After Life is an admirable effort, it is difficult to call it a perfect fit for Gervais’ particular talents.

But, as is often the case with Gervais’ work, what elevates After Life is its empathy, and a true wish that the world could be a little less cruel. Even if Gervais tries to hide this sentiment behind macho, anti-PC bravado on Twitter, it still surfaces in his latest heartfelt series.