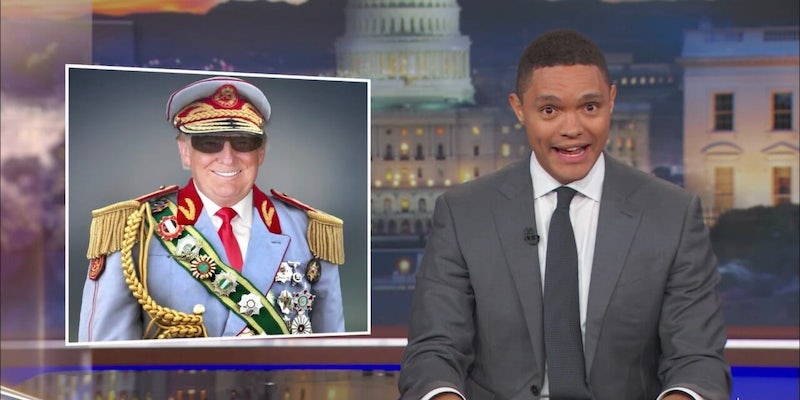 'We’ll have more on this tomorrow when they scramble to cover the whole thing up,' Colbert joked.

Stephen Colbert, who noted that the story “broke just minutes ago,” launched straight into Comey’s firing. His heart was still racing from hearing the news that Trump fired the man who said under oath that he was investigating Trump’s campaign over ties to Russia.

“That shows no gratitude at all,” Colbert said. “Did Trump forget about the Hillary emails that Comey talked about?”

But Colbert had a bigger point to make: the investigation about Russia won’t go away no matter how much Trump tweets about it going away.

Trevor Noah was stunned and also saw the move as a way for Trump to make the FBI investigation over Russia go away before bringing back one of his most infamous Trump comparisons.

“I know we said Trump was an African dictator,” Noah said. “But right now even Africans are watching this saying, ‘Yo, yo, yo, yo, yo, wow, Donald Trump does not fuck around.’”

After catching up his viewers on what had been happening regarding Comey and former Trump NSA advisor Michael Flynn, Noah showed just how nervous Russia makes the president. Because whenever Russia comes up, Trump tweets—a lot. And he’s been posting a lot of tweets since Comey was fired.

Jimmy Kimmel used similar language for Trump. Although his take was on the lighter side, Kimmel noted how much Trump must hate his job if he fired the person who likely helped him win the election

And although details were still scarce as the hosts filmed their shows, there will be a lot more to pour over in the coming days.

“We’ll have more on this tomorrow when they scramble to cover the whole thing up,” Colbert joked.