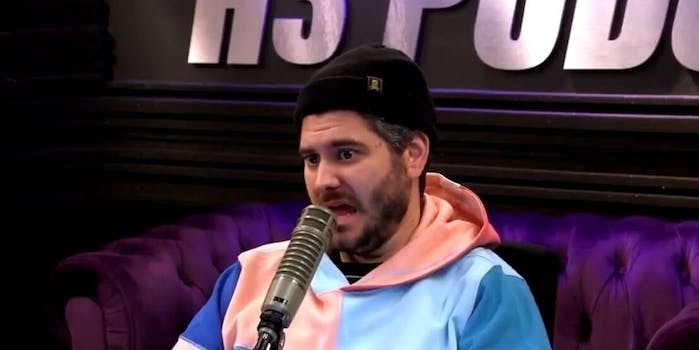 Ethan Klein has never been one to hold back on his opinion. The YouTube star, in the past, has gone after FuckJerry, has savaged Ricegum in a diss track, and has blasted Trisha Paytas with a disgusting body-shaming screed.

But now Klein has turned his attention to K-pop and the people who stan it. During a recent H3H3 podcast, Klein and his wife, Hila, were watching YouTube’s much-maligned 2019 Rewind video. A short clip of K-pop superstars BTS began playing, and Klein went off on K-pop and its culture.

“I don’t get the BTS thing,” Klein said. “I’m just going to say it right now: I don’t like K-pop. I hate K-pop. I don’t get BTS. How did it become a thing in Western culture where all these grown men and little girls are jerking off to little K-pop boys? It’s a little fetish. It’s a twink gay fetish with these K-pop boys.”

Hila then wondered if people liked K-pop in an ironic way.

“No,” Ethan Klein said. “People are crazy on Twitter, the K-pop fans. It’s so weird. All they do is post a GIF of their favorite K-pop person dancing and they go fucking crazy. I’m pretty sure somebody is going to try to assassinate me.”

He also wrote, “My message to K-pop fans: Lighten up nerds, it you can’t handle your hobby being made fun of a little bit then you are really are just a bunch of little girls jerking off to kpop boys.”

My message to K-pop fans:

Lighten up nerds, it you can't handle your hobby being made fun of a little bit then you are really are just a bunch of little girls jerking off to kpop boys.

That face when K-pop stans are trying to take the moral high ground over a joke… but are responsible for dozens of suicides of K-pop idols because of their online abuse pic.twitter.com/SuceykzUNt

Klein almost certainly knew his criticism would result in a deluge of online hate from BTS fans. But he’s oftentimes a provocateur for various online fan groups, and he seems to enjoy making them mad for little reason. And nobody in his orbit is safe.

Hila asked on Twitter Sunday if the #h3h3partyisoverparty hashtag included her as well. Her husband confirmed that “I’m taking you down with me.”