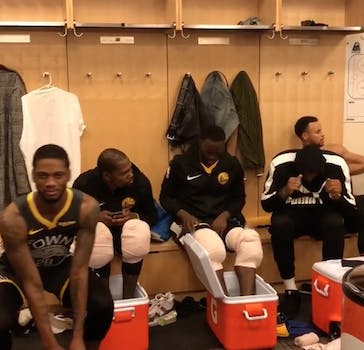 Turns out a fight between the Golden State Warriors and actor/former Fergie husband Josh Duhamel has been brewing and has finally come to a head. What, you didn’t know about the drama? Neither did we, but it did spawn and a hot new diss track.

Back in February, Duhamel’s estranged wife sang a special rendition of “The Star Spangled Banner.” You know the one—sort of unique jazz version with scats.

Okay, it was really weird. An important lesson that some things should just remain the same. Or be sung only by Whitney Houston.

While many say they were laughing at home, the Golden State Warrior players, including Draymond Green, were laughing too, except on camera.

He wasn’t the only one. Stephen Curry, DeMarcus Cousins, Jordan Bell, and Kevin Durant were all struggling to keep a straight face.

But there was something about Green’s reaction that really set off Duhamel.

So much so, that in an interview with Kristine Leahy posted earlier this week, he told Green that he owed Fergie an apology.

He went on to say of Green:

Just because he knew the camera was on him and he snickered about it. I just think that if he would have been a real man, he would have at least called her and said, ‘Listen, I’m sorry that I caused all this.’ That’s what a real man would have done, in my opinion.

Would a real man actually apologize for laughing at a hilarious and horrible version of “The Star Spangled Banner?” Possibly. But a petty man would surely respond exactly as Green did.

Yes, petty, but to be fair the song is a total banger. Much better than the original. Expect it to be on Spotify within the next few days.

As of Saturday Duhamel did appear to wave the white flag, tweeting, “Note to self: Think twice before you call out the champs. Well played,” along with a GIF of shrugging Warriors guard Klay Thompson.

Note to self: Think twice before you call out the champs.
Well played @warriors #NBATwitterisnojoke #sorryferg pic.twitter.com/W2ePGvEM8w

No one messes with the Warriors.