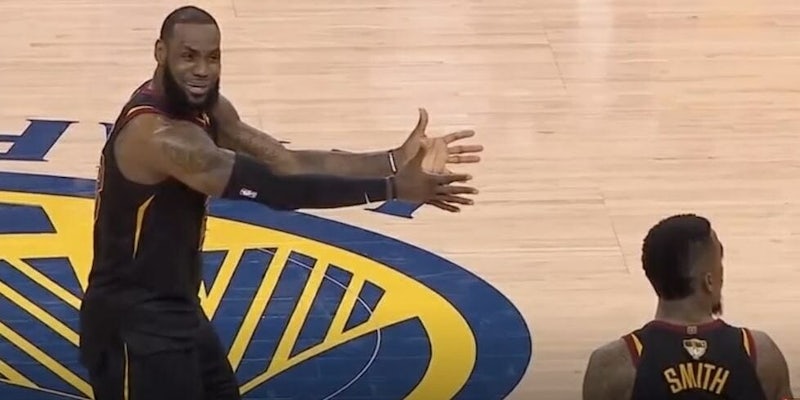 James' misery was the internet's gold.

LeBron James was utterly brilliant for most of Game 1 of the NBA Finals on Thursday night, almost single-handedly leading the Cleveland Cavaliers to a win against the heavily favored Golden State Warriors.

But despite the fact that James scored 51 points and had his team tied with Golden State as the game neared its end, he couldn’t stop teammate J.R. Smith from committing a bone-headed mistake that kept the Cavaliers from potentially winning the game and sending the contest to overtime where the Warriors eventually won.

And James’ utter agony at Smith’s blunder has become a meme in the hours after the game ended.

The play that decided Game 1. pic.twitter.com/e1UeOv57Rn

Smith apparently thought the Cavaliers were ahead by one point when he grabbed possession of the ball after a missed free throw by Cleveland. That’s why he dribbled the ball away from the basket so he could allow precious seconds to waste away. But in reality, Cleveland and Golden State were tied, and instead of draining the clock in preparation for a Cavaliers victory, Smith was wasting the time it could have taken Cleveland to attempt another shot and to take the lead for real.

And James couldn’t have been more livid, throwing his arms out in pure disgust as his face conveyed the words, “What in the HELL are you doing?” Well, we know what the internet was doing in the minutes after. They were memeing and dunking all over James’ disbelief.

Pop culture references, call-backs to other big missed opportunities in sports, and a strong Toy Story reference. It was the perfect time for some nearly perfect memes.

"This meeting could have been done in one email!" pic.twitter.com/GhkZufTaTT

YOU AREN'T THE REAL BUZZ LIGHTYEAR, YOU'RE AN ACTION FIGURE. YOU ARE A CHILD'S PLAYTHING! pic.twitter.com/1ttgVPqK2X

When the Chopped contestant goes to the ice cream machine pic.twitter.com/pVVJRoHoEb

when I go to a restaurant but fill up on bread pic.twitter.com/aPykmi4h82

"WHY DIDN'T THEY JUST USE A PHOENIX DOWN ON HER" pic.twitter.com/T8z0YhyAOM

"THAT'S how Han Solo got his name?" pic.twitter.com/qqUc9lrjAN

“ALL YOU HAD TO DO WAS HAND THE BALL TO MARSHAWN LYNCH” pic.twitter.com/Q2QiFOboNx

Instant replay of JR Smith and LeBron in the closing seconds of regulation. pic.twitter.com/8qYCv7mBQf

After the game, James walked out of the press conference after he was questioned about Smith’s actions. “Be better tomorrow,” James told reporters after he got fed up and left the podium.