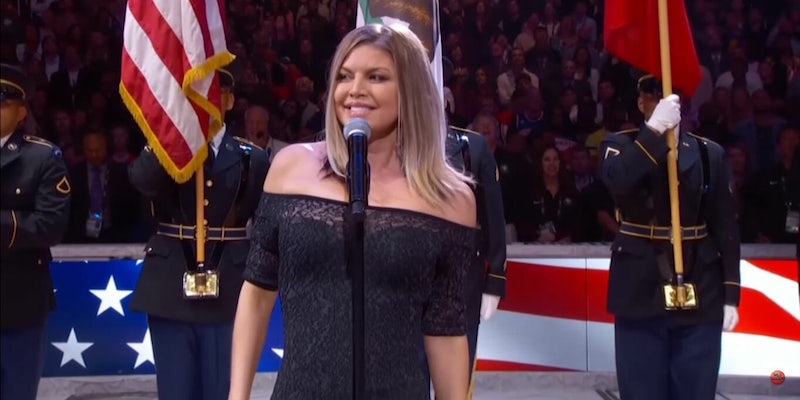 Even the NBA stars next to her couldn't fake it.

Fergie sang the national anthem during the NBA All-Star game Sunday night and people could not contain their laughter. The “Glamorous” singer sashayed up to the mic and delivered a jazzed-up rendition of “The Star-Spangled Banner,” but the end result sounded like a bad cover and the looks on players’ faces said it all.

Throughout the performance, the camera panned between shots of the players who all appeared baffled at first. Many desperately tried to avoid looking directly at Fergie, as if a head-on stare could lead to the kind of eye damage you can get from looking at the sun. Of course, Twitter users had no chill and posted player responses to the singer’s rendition.

Players faces during Fergie’s rendition of the National Anthem… pic.twitter.com/QQ3VXaBchT

By the end of the singer’s botched anthem job, everyone was smiling, including Fergie herself who beamed with excitement and accomplishment after delivering its “home of the brave” line. But it’s safe to assume the singer and her audience were not smiling for the same reason.

Draymond started cracking up while Fergie was singing the national anthem pic.twitter.com/3pMlgjGdYC

I just listened to 7 seconds of Fergie trying to sing the National Anthem and now, I am WIDE awake. I’m so alert I could do my taxes right now. Shit.

Check out a full clip of Fergie’s botched anthem below: