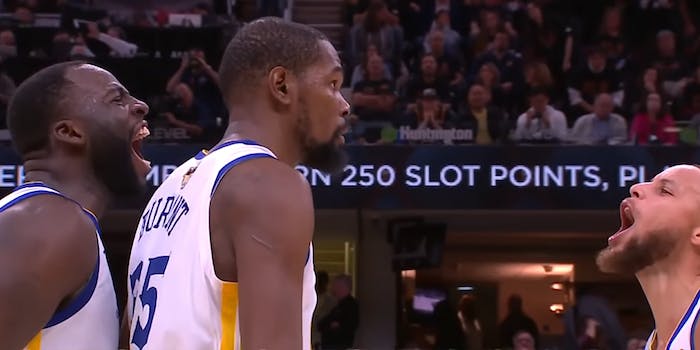 Kevin Durant looks like an exhausted parent in this new meme

Durant hit the shot, but it's his reaction to his teammates' reaction that's winning the internet.

In case you missed it, Kevin Durant hit a huge three-pointer from way outside in the waning seconds of game three of the NBA finals last night. The shot put the Golden State Warriors up 106 to 100 and led to them winning the game 110 to 102, leaving the Cleveland Cavaliers in 0-3 hole for the series.

And while the shot was indeed a thing of beauty…

It was his teammates’ reaction that people really fell in love with, or more accurately Durant’s reaction to their reaction. When Steph Curry and Draymond Green decided to yell in Durant’s face after the shot, he couldn’t have looked more like an exhausted parent dealing with two screaming children if he tried.

KD look like the parent that’s too tired of his kids BS to say anything https://t.co/T5G5kFSVhU

When you’re sober at a party and your friends are trying to get you to take shots https://t.co/C6vBqyJ0kb

Obviously, such a picture was ripe for meme-ing, and Twitter was only too happy to oblige.

When you break out a new hat & your homies hype it up pic.twitter.com/LvFX9li3Jd

No team in NBA history has ever come back from a 0-3 deficit to win the finals, but it’s never wise to count out LeBron James, who many people feel is the greatest player in the history of the game.

Then again, there’s a reason this is the most popular LeBron meme right now.

when I go to a restaurant but fill up on bread pic.twitter.com/aPykmi4h82

And naturally, someone already thought to combine the two. Could this be a vision of things to come?

Game four of the NBA finals will air on ABC tomorrow night at 9pm.