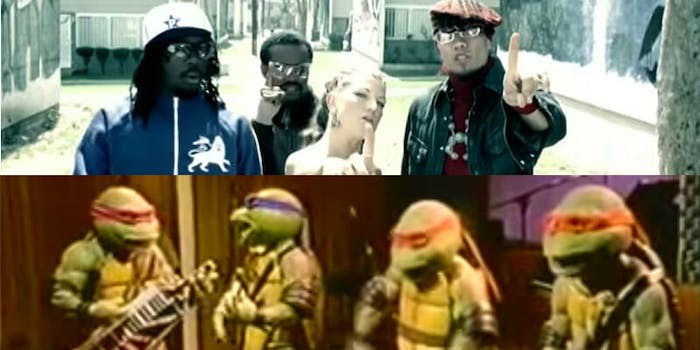 Just two days after reports that Fergie has left the Black Eyed Peas, an outlandish Reddit conspiracy theory alleges the members of the iconic pop group once performed in a live-action Teenage Mutant Ninja Turtles production.

Redditor LarBrd33 put forth the theory in a comment thread Tuesday, saying the original Black Eyed Peas members (Fergie, Will.i.am., apl.de.ap, and Taboo) were originally cast in the lead roles of a Disney-esque live concert spectacle called “Coming Out of Their Shells”. It’s unclear who would have played whom.

The user said the Black Eyed Peas’ longterm label, Interscope Records, drew up the contract for the project with Pizza Hut.

“Upon completion of the tour, there was no longer a market for a turtle-themed follow-up album,” LarBrd33 explained. “Since the four ‘musicians’ were still under contract with Interscope, [co-founder Jimmy Iovine] rebranded them as laser-light spaceman themed children’s entertainers.”

And that’s, according to LarBrd33, how the Black Eyed Peas as we know them came to be.

“To everyone’s surprise… the simplified toddler lyrics and action figure aesthetic inexplicably became popular with a teenage audience and thus they continued to perform riveting songs like [‘My Humps’] and [‘Let’s Get It Started’] as a pop group marketed towards adult Top-20 radio,” the Redditor said.

The theory, of course, is ludicrous. But LarBrd33 even has an explanation of why there’s no evidence in favor of Black Eyed Peas members having once dressed up like Leonardo, Michelangelo, Donatello, and Raphael. The user said the record company “scrubbed away” any record of the performances.

“You’ll likely never see any behind the scenes stuff of Fergie/Will.i.am’s early days as Ninja Turtle costumed performers,” LarBrd33 said. “Interscope put a lot of effort into burying that history. Too much money at stake. They don’t want you to see how this particular Turtle Pea Soup was made.”

Interscope Records did not immediately respond to the Daily Dot’s request for comment.