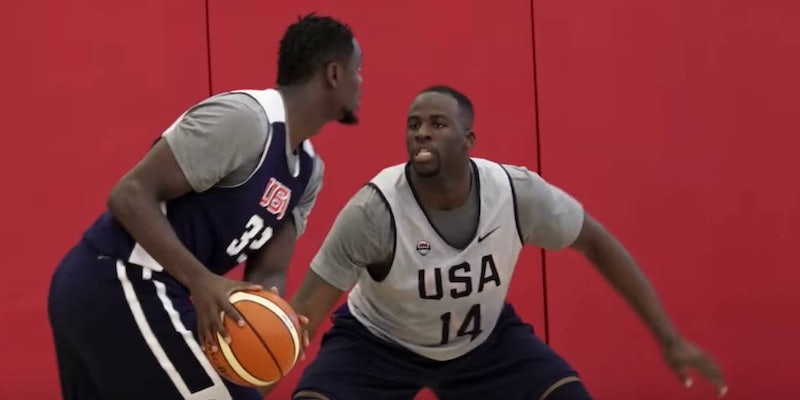 The king of Snapchat reclaims his crown.

Draymond Green is back to his dick-kicking fun-loving self on Snapchat. The Team USA power forward has recovered from his NSFW misstep of sexting his entire fanbase and returned to trolling his teammates—and just in time for the Olympics.

Green took to Snapchat to issue a scathing team-wide critique of his fellow players’s hairlines. The hot takes were anything but a morale-booster.

Fellow Golden State Warrior Klay Thompson got the kindest remarks, with Green mocking his bad fade but otherwise giving his hair the OK. Meanwhile, 26-year-old Paul George made it out with a verdict of “baby hairline.” Everyone else, including Green, was either falling prey to the creep—that is, a receding hairline—or hadn’t seen a barber since Team USA announced its starting lineup in June.

“Moral of the story is that hair isn’t a strength for this team,” Green’s final snap reads, followed by “going for the gold!” with a medal emoji. Green may be onto something with that proclamation.

America’s Olympic basketball team could run down the tunnel and onto the court sporting Nicki Minaj wigs and still be considered the runaway favorite, considering Team USA’s overall 130-5 record throughout their history of competing on the worldwide stage.