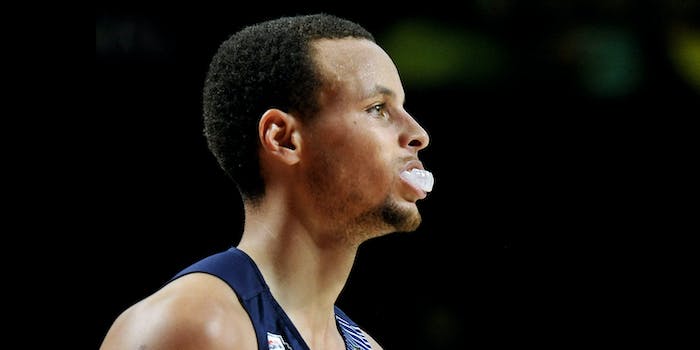 Though the GOP’s new tax plan might eventually screw the majority of people who aren’t wealthy, there’s good news for everybody who will be affected by the “Tax Cuts and Jobs Act”—at least nobody mentioned you by name in the explainer. Well, unless your name happens to be Steph Curry of the Golden State Warriors and you happen to be one of the best players in the NBA.

In a passage that caught the attention of Franklin Leonard, the founder and CEO of the filmmaking community The Black List, the House Ways and Means Committee’s explanation of the plan mentioned Curry while describing how it would eliminate a tax loophole for the rich.

The Huffington Post explained what lowering the 25 percent pass-through rate would actually mean, writing, “Essentially, the idea is that someone with an extremely high salary, such as Curry, couldn’t incorporate himself to benefit from a 25 percent tax break. Republicans are proposing a specific safeguard to make sure the cut will benefit legitimate business owners, such as the fictional Steve’s Bike Shop,” used by Republicans to explain the plan.

Curry found the humor in his tax plan shoutout.

I wonder if Steve’s Bike shop is hiring…

But many other Twitter users wondered why the Ways and Means Committee used the name of a Black NBA star to try to shield themselves from criticism about the tax plan that will massively lower the corporate tax rate, strip out medical and student loan interest deductions, and repeal the estate tax.

WTF? Singling out the success of a black man for this nonsense is exactly why April Ryan should keep asking her questions. Every. Damn. Day.

Steph Curry after being mentioned by POTUS and the GOP tax plan in the last 6 weeks pic.twitter.com/u3kq1FCmT0

I could argue Steph created and/or had a hand in creating far more jobs via NBA interest/attendance/merchandising/etc. than Steve ever could

It’s worth noting that the Warriors, after winning the NBA title last year, expressed reservations about meeting Donald Trump in the White House. Curry said he would vote to not attend the celebration. Trump then rescinded the invitation and called out Curry by name.

“It’s kind of weird,” Warriors coach Steve Kerr said Thursday, via the San Jose Mercury News. “They just randomly threw him in there.”

If you think about it, though, it maybe wasn’t random at all.