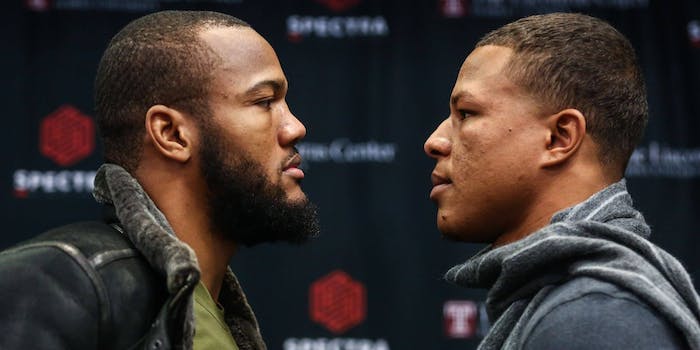 How to stream Julian ‘J-Rock’ Williams vs. Jeison Rosario

Williams is the best fighter at 154 pounds. Rosario will try to prove otherwise.

Three years ago, Julian “J-Rock” Williams saw his junior middleweight title dreams vanish when Jermall Charlo knocked him out. After that, Williams was seen as a solid contender but perhaps not the kind of fighter who could be a world champion. Then, he faced Jarrett Hurd last May and gave the performance of his career, winning two titles in one night.

Now, many consider Williams the best fighter at 154 pounds. On Saturday, he’ll defend his unified belts vs. Jeison Rosario in a primetime matchup that you can live stream on Fox. For Williams, it’s been a long haul during his 10-year career, and now that he’s putting his titles on the line in his hometown of Philadelphia, he’s not interested in giving them away.

“It took a lot for us to get the title,” Williams said during a recent press conference. “We had some bumps in the road. But me and my team, we just kept battling and fighting through. We finally got our breakthrough fight and got the titles.”

Now, he gets the chance to keep them for even longer.

Here’s everything you need to know to watch Julian Williams vs. Jeison Rosario if you don’t have cable.

Even if you’ve waved goodbye to cable services and exclusively stream the content you watch, you can still take in Williams vs. Rosario. Every major live streaming service offers Fox, and each one allows at least a one-week free trial. That includes YouTube TV and DirecTV Now.

Hulu is a fantastic way to either live stream TV (it has nearly 60 channels, including Fox and all the major broadcasting networks) or to watch its massive on-demand library of movies, TV shows, and original series. Hulu allows you to do both. Thanks to that versatility, Hulu with Live TV is a great option. It’s also the best way to bundle your streaming services into one place. (Here’s the complete list of Hulu Live TV channels.)

If you’re a big-time sports fan, FuboTV might be your best streaming service option. If you love international soccer and you’re a Spanish speaker, FuboTV also offers various add-on packages, including Fubo Latino and Fubo Português. Plus, you can get your boxing fix with Williams vs. Rosario on Fox. (Here’s the complete FuboTV channels list.)

If you want to watch Williams vs. Rosario online via Sling TV, you’ll need to be subscribed to either Sling Blue ($30 per month) or Sling Orange + Blue ($45 per month). Both of those packages include Fox and FS1 (and it’s still a great little perk that Sling subscribers can order a la carte packages). Sling TV also offers a special Latino package for bilingual viewers. If you sign up now, you’ll actually get $10 off your first month, bringing your first bill down to just $20 or $35. (Here’s a complete guide to Sling TV channels and our Sling TV review.)

Locast is a free not-for-profit service that allows people to watch all of their local channels, including the Fox affiliate, for free from their web browsers. The unfortunate part is that Locast isn’t available everywhere—it’s in about 35% of U.S. cities at the moment. If you live in New York City, Philadelphia, Chicago, Houston, Dallas, Phoenix, Los Angeles, San Francisco, Denver, Boston, Baltimore, Atlanta, Sioux City, Cedar Rapids, or Washington, D.C., you’re in luck. That’s because Locast is available to the residents in those cities. If you have Google Chromecast or a comparable device, you can then “cast” Williams vs. Rosario to your big screen.

Julian Williams vs. Jeison Rosario: Why it matters

After the below scene happened to Williams vs. Charlo in 2016, not many people believed he could completely turn around his career and become the best at junior middleweight.

In the aftermath of that knockout, Williams (27-1-1, 16 knockouts) had to refresh himself. He won four-straight against solid, but not standout, competition, and though he was about a 4-1 underdog vs. Hurd, Williams showed his skills, his power, his toughness—and the ability to revitalize his career.

“Our approach is not like the new age way,” Williams said. “This is the microwave era, everything’s got be quick and glossy, but that’s not the way boxing is supposed to be. In this era, there’s a lot of pressure to be undefeated and act a certain way. But we see boxing as just like life. Sometimes you win and sometimes you lose, and we just take it all in stride.”

Rosario (19-1-1, 13 KOs) also has had to battle back from defeat. In 2017, Rosario was stopped by Nathaniel Gallimore—who ultimately lost to Williams 12 months later—and since then, he’s beaten all seven opponents he’s faced. He’s certainly impressed Williams.

“Rosario is a really good fighter, and I’m not just saying that,” Williams said. “They’ve been matching him tough and he’s been coming through fights he wasn’t supposed to win. I’m expecting a really tough fight and for him to be in shape. He’s got 36 minutes to change his life forever. I was in his exact same position very recently. It would be extremely arrogant for me to think I can’t lose.”

That’s exactly what’s going to happen, said Rosario, who is about an 8-1 underdog.

“On Jan. 18, it’s going to be like a Rocky movie, we’re going to scrap it out from start to finish,” Rosario said. “I’m going to end up as the new Rocky in Philadelphia that night.”