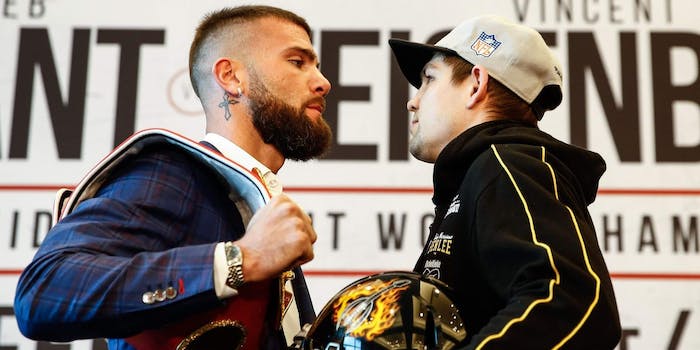 How to stream Caleb Plant vs. Vincent Feigenbutz

Watch one of the best 168-pounders in the world in primetime.

In a super middleweight division that’s quickly becoming crowded with all kinds of talent, Caleb Plant might be the best in the weight class. He’s tough. He punches hard. And on Saturday vs. the little-known Vincent Feigenbutz in a fight you can stream on Fox, he’ll be returning to his hometown of Nashville to try to defend his 168-pound super middleweight title.

He shouldn’t have many problems vs. Feigenbutz. But that doesn’t mean you should skip the primetime Fox broadcast. If you want to watch the fighter that could challenge and perhaps beat the best in the division—boxers like Callum Smith, David Benavidez, Daniel Jacobs, and perhaps Canelo Alvarez—Plant is planning to put on a show.

“I’ve worked very hard for this moment over many years,” Plant told reporters this week. “There was a point in time when there were no cameras in front of me. It was just me and my small team, that’s grown into a big team. Now we’re on the big stage and we’re prepared.”

Here’s everything you need to know to watch Plant vs. Feigenbutz if you don’t have cable.

Even if you’ve said goodbye to cable services and exclusively stream the content you watch, you can still take in Plant vs. Feigenbutz. Every major live streaming service offers Fox, and each one allows at least a one-week free trial. That includes YouTube TV and DirecTV Now.

Some of the best options to stream Fox are listed below, but you can also watch the event on the Fox Sports app. You can also view the event on your desktop computer on FoxSports.com.

Hulu is a great way to either live stream TV (it has nearly 60 channels, including Fox and all the major broadcasting networks) or to watch its massive on-demand library of movies, TV shows, and original series. Hulu allows you to do both. Thanks to that versatility, Hulu with Live TV is a great option. It’s also the best way to bundle your streaming services into one place. (Here’s the complete list of Hulu Live TV channels.)

If you’re a big-time sports fan, FuboTV could be your best streaming service option. If you love international soccer and you’re a Spanish speaker, FuboTV also offers various add-on packages, including Fubo Latino and Fubo Português. Plus, you can get your boxing fix with Plant vs. Feigenbutz on Fox. (Here’s the complete FuboTV channels list.)

If you want to watch Plant vs. Feigenbutz online via Sling TV, you’ll need to be subscribed to either Sling Blue ($30 per month) or Sling Orange + Blue ($45 per month). Both of those packages include Fox and FS1 (and remember, it’s still a great perk that Sling subscribers can order a la carte packages). Sling TV also offers a special Latino package for bilingual viewers. If you sign up now, you’ll actually get $10 off your first month, bringing your first bill down to just $20 or $35. (Here’s a complete guide to Sling TV channels and our Sling TV review.)

Locast is a free, not-for-profit service that allows people to watch all of their local channels, including the Fox affiliate, for free from their web browsers. The unfortunate part is that Locast isn’t available everywhere—it’s in about 35% of U.S. cities at the moment. If you live in New York City, Philadelphia, Chicago, Houston, Dallas, Phoenix, Los Angeles, San Francisco, Denver, Boston, Baltimore, Atlanta, Sioux City, Cedar Rapids, or Washington, D.C., you’re in luck. That’s because Locast is available to the residents in those cities. If you have Google Chromecast or a comparable device, you can then “cast” Plant vs. Feigenbutz to your big screen.

Caleb Plant vs. Vincent Feigenbutz: Why it matters

Plant (19-0, 11 knockouts) is making a mandatory defense of his title vs. Feigenbutz, but at this point, it’s unclear why Feigenbutz (31-2, 28 KOs) was in such a lofty position in the first place. He’s only fought outside of his native Germany twice (and never in the U.S.), and he’s never beaten anybody close to resembling a world-class fighter.

Still, he appears to have impressive power, and he’s coming off one of the most noteworthy victories of his career, stopping previously undefeated Cesar Nunez last August.

“You will see how I bring the fight on Saturday night,” Feigenbutz said this week during a press conference. “I’ve prepared with the best training camp of my life. I don’t care about anything Plant says to me today, because in the ring, I’ll have the answer for everything.”

Plant, meanwhile, is fighting for the first time in his hometown, and he’s coming off two impressive wins against Jose Uzcategui, where Plant won his title, and with a third-round knockout of Mike Lee.

Plant is a big betting favorite—as of this writing, he’s 25-1 to beat Feigenbutz—leading some boxing observers to wonder why the promoters are putting such a big mismatch on a national Fox broadcast. But remember, Julian “J-Rock” Williams was a 30-1 favorite to beat Jeison Rosario last month on Fox, and Rosario ended up knocking out Williams.

So it’s not out of the realm of possibility that Feigenbutz could stun Plant and take his title, as well.