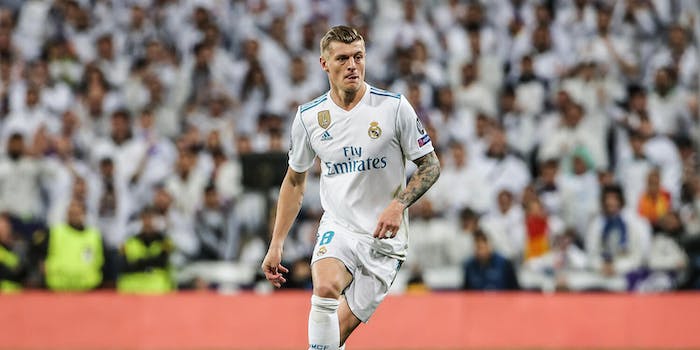 How to stream Real Madrid vs. Atletico Madrid in the Supercopa de Espana finals

It's a surprise Madrid Derby on Sunday, in Saudi Arabia, for silverware. (Let us explain.)

Why is the usual La Liga schedule on hold this week? It’s all because of the Supercopa de España finals on Sunday, which is a Madrid Derby between Real Madrid and Atletico Madrid.

The catch, though, is that it’s in Saudi Arabia instead of the Spanish capital. You’ll want to go to a streaming service with ESPN Deportes (rather than BeIN Sports) to catch it.

Not so long ago, the Supercopa de España was an annual head-to-head between two of Spain’s top teams to kick off the season. It’s now morphed into a midseason four-team tournament hosted in Saudi Arabia. Real Madrid advanced on Wednesday by dispatching Valencia, whereas Atleti came from behind to beat Barcelona, despite a goal from Atleti-turned-Barca striker Antoine Griezmann.

Here’s everything you need to know to live stream Real Madrid vs. Atletico Madrid, including what to watch for on the pitch.

The match is on ESPN Deportes and ESPN+, providing an easy way to stream Supercopa de España matches.

Real Madrid vs. Atletico Madrid: What to watch for

Both teams are trying to catch Barcelona in the La Liga race, and while there’s a trophy to be won at the end of this match, it’s not what the teams are looking for. Both teams are also still in the hunt for a Champions League trophy, though Real has to get past Manchester City and Atleti has to defeat Liverpool in what promises to be two great Premier League vs. La Liga showdowns.

Real got to the final, as expected, beating Valencia 3-1. It was, in fact, only a stoppage-time penalty kick that allowed Valencia to get on the board at all. Los Blancos got goals from Isco and Luka Modric to seal the match. But the corner-kick Olimpico from Toni Kroos that opened the scoring was the talk of the match. (Aside from, of course, the sweet new mint green third kits Real Madrid broke out.)

Atletico Madrid got on the board first in its semifinal match with Barcelona via a Koke goal. Then, Lionel Messi and Antoine Griezmann pulled Barca into the lead. But good goalkeeping from Jan Oblak and some harsh VAR decisions kept Atleti in it. Alvaro Morata pulled Atleti level from the spot with less than 10 minutes to go in regulation, and Angel Correa finished off Barca with the 86th-minute winner.

Here are the highlights (from Barcelona’s unhappy perspective):

While there was a good chance that Sunday’s final was going to turn out to be a displaced El Clasico, some Spanish soccer fans actually prefer the Madrid Derby. In lieu of the usual La Liga action, it’s worth a look.