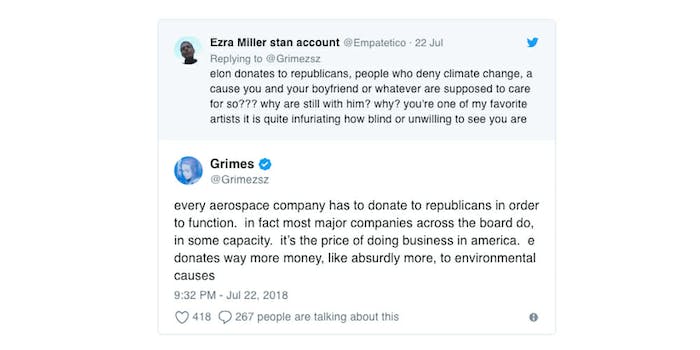 It’s important for couples to show a unified front, but the relationship between Grimes and Elon Musk is turning the Canadian musician into a spokesperson for her billionaire boyfriend.

Grimes defended this week the fact that Musk donates a substantial amount of money to the Republican party, even though it’s historically opposed to many of the entrepreneur’s core beliefs such as climate change. She’s also deleting some of these pointed tweets. Again.

A report released in early July revealed that Musk donated nearly seven times as much money to Republican-affiliated campaigns and committees than Democratic causes since early 2017. According to the Hill, federal election filings showed the SpaceX founder gave nearly $40,000 to Protect the House—a GOP PAC designed to help Republicans maintain their control over Congress. Rep. Kevin McCarthy (R-Calif.) oversees the PAC and has publicly played down climate change.

Musk defended his donations on Twitter, explaining that his politics don’t fall on one side of the aisle or the other. He’s more concerned about humanitarian issues than political issues—and that’s when Grimes stepped in.

Thanks Jack. To be clear, I am not a conservative. Am registered independent & politically moderate. Doesn’t mean I’m moderate about all issues. Humanitarian issues are extremely important to me & I don’t understand why they are not important to everyone.

Grimes tweeted and deleted the explanation that these donations are just “the price of doing business” in America.

Grimes then addressed and removed comments on Tesla’s labor practices.

.@Grimezsz deleted this tweet from earlier today in which she says Elon tried to force a union vote at Tesla. (Tesla is currently facing several charges from the NLRB regarding alleged unfair labor practices). pic.twitter.com/Jfz0wtkRD1

After defending Musk against random people on Twitter, the songwriter blasted publications because they did not reach out to her for comment. It’s a fair criticism of blog-era journalism; however, these outlets are reporting verbatim quotes from Grimes that are standalone newsworthy.

Grimes’ record label, 4AD, did not immediately reply to a request for an interview.