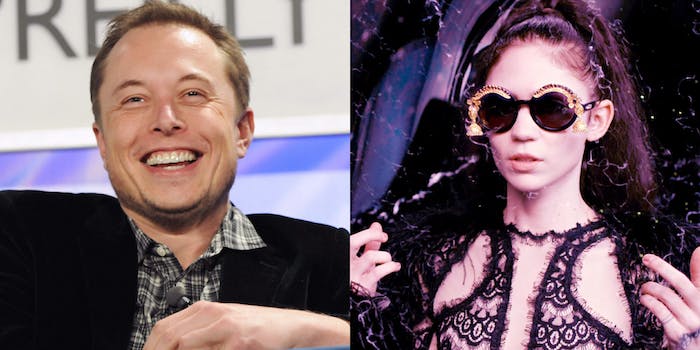 Tech billionaire Elon Musk and alt-pop singer Grimes surprised their fanbases on Monday by walking the red carpet together at the Met Gala.

The decidedly couple-y gesture came just hours after Page Six first reported the pair might be romantically involved. It seems the two met in a deeply 2018 way: The 46-year-old Tesla CEO was going to make a joke about AI on Twitter, and did a quick keyword search beforehand to make sure nobody had already made the same joke. It turns out somebody had—Grimes, three years ago. Musk apparently struck up a conversation with the 30-year-old “California” singer about their shared interest, and the rest is history.

“Grimes said this was the first time in three years that anyone understood the joke,” a source told Page Six. “They were both poking fun at AI.”

Despite that You’ve Got Mail meet-cute, fans on Twitter are convinced this coupling is further proof that we’re inhabiting a dark timeline. Jokes about the unlikely duo trended throughout the evening, and really picked up once they appeared on the red carpet together (with Grimes wearing a choker shaped like the Tesla logo).

Grimes wearing a Tesla choker at the #MetGala for Elon Musk is the modern version of Angelina Jolie wearing Billy Bob Thornton's blood in a vial around her neck pic.twitter.com/MFryNhv2xX

where were you when you learned about elon musk and grimes

If elon musk and grimes are actually dating i will immediately shave my head and go through my britney breakdown .

Grimes is reportedly the only woman Musk is following on Twitter at the moment. Ah, true, normal love.