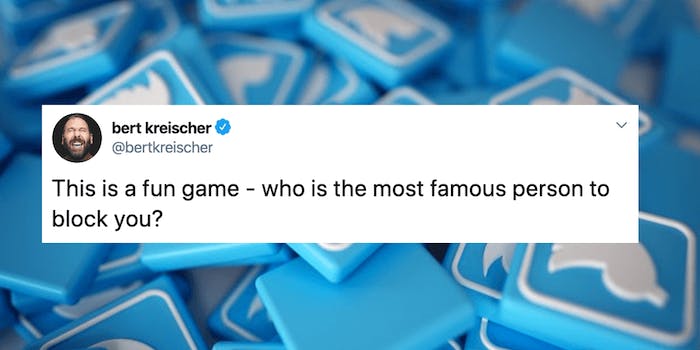 Twitter users are sharing which celebrities have blocked them

'I tweeted that she looked like a cabbage patch doll trying to look hot, and she blocked me.'

Over the weekend, Twitter users began sharing which celebrities have blocked them on the popular social media platform.

The trend was started on Saturday by standup comedian Bert Kreischer, who revealed he had been blocked by none other than Kiss bassist Gene Simmons.

“This is a fun game – who is the most famous person to block you?” Kreischer asked.

This is a fun game – who is the most famous person to block you? pic.twitter.com/gSGtkiRmHF

And the answers came rolling in. Twitter user @OfficialJonZal showed that he’d been blocked by just about every high-profile, right-wing character on the site.

While you’d expect political talking heads to block their most hardcore detractors, some of the other famous accounts featured definitely raised more questions than answers. Such as, how exactly do you get blocked by Flo from Progressive?

Apparently it’s quite simple. All you have to do is tell her “fuck you” for some reason. Perhaps Quackerss_ uses GEICO insurance.

One user blocked by comedian Amy Schumer even claimed that his diss was later used in one of her comedy specials.

“I tweeted that she looked like a cabbage patch doll trying to look hot, and she blocked me…. fun story, she later used that in a comedy special,” Twitter user @mikebreslin815 said.

She bad mouthed tampa in her book and i defended the city. pic.twitter.com/hEcNcjHoB2

Unsurprisingly, the account for Scientology found its way into the mix.

And it looks like O.J. Simpson has finally started “getting even” with all those people attacking him online.

Seriously though, how do you get blocked by the iconic 1997 basketball-playing canine known formally as Air Bud?

It goes without saying that President Donald Trump has blocked countless people. But what about everyone’s favorite parrot from Disney’s Aladdin, Gilbert Gottfried?

Gilbert tweeted a Charles Manson joke that said Is it hot in here, or am I crazy. I actually have a Manson shirt that says that so I tweeted back a picture of the shirt saying I have that shirt too. He then blocked me. pic.twitter.com/5KWXRc24y4

Megachurch pastor Joel Osteen apparently likes to block too, although probably not as much as he likes blocking people from his church during natural disasters.

I didn’t even @ the guy. Hunted me down. pic.twitter.com/T1YgJnzVAa

I may have called him a fake Christian and told him to fornicate himself. pic.twitter.com/Ez6S7zRuco

Music artists from the 1990s also seem to have a thing for blocking as well.

They gave me the run around pic.twitter.com/LL3Cx9wgvs

Sports teams and the leagues they belong to have also had enough of your petty trash-talking.

The National Hockey League. No idea why lol pic.twitter.com/FnA10EbuQL

It somehow seems that just about every celebrity with a Twitter account has had to block someone at least once.

Of course, in most cases, it remains unclear why exactly accounts were blocked. It’s entirely possible many of them had it coming. Either way, getting blocked by a famous person on Twitter seems to have become a badge of honor.