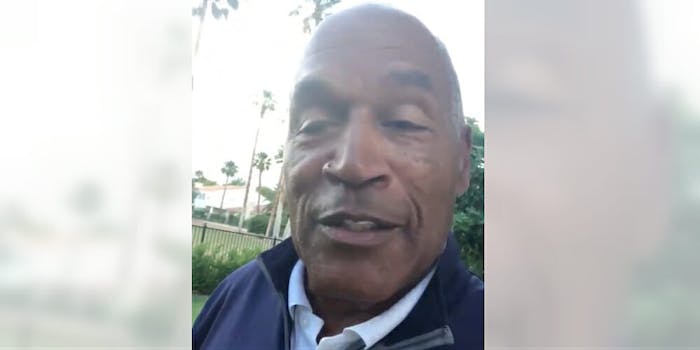 O.J. Simpson just joined Twitter in the most bizarre fashion

'I got some getting even to do.'

O.J. Simpson came into the Twitter scene hot on Friday night. He joined the social media platform just a day after the 25th anniversary of the murders of Nicole Brown Simpson, his late ex-wife, and her friend Ronald Lyle Goldman–a high-profile incident Simpson was famously acquitted for.

Simpson’s account has amassed over 160,000 followers since its inception. His first post was a video, in which he said he has some “getting even to do.”

“Hey Twitter world this is yours truly,” Simpson said. “Now coming soon to Twitter, you’ll get to read my thoughts and opinions on just about everything. Now there’s a lot of fake O.J. accounts out there so this one—@TheRealOJ32—is the only official one. So, it should be a lot of fun. I got some getting even to do. So God bless. Take care.”

People on Twitter are freaking out, leading both Simpson’s name and the “juice is loose,” a popular phrase used during Simpson’s football career in the ’70s, to trend online.

When OJ Simpson says he has some "getting even" to do: pic.twitter.com/qcmyrGRZxi

Many expressed fear that Simpson could be lurking nearby, capable of following any account or liking any tweet at a moment’s notice.

After being acquitted of both Brown and Goldman’s murders in 1995, Simpson did a decade-long stint in prison for armed robbery. He was recently released in 2017.

Amid the news of Simpson joining social media, some Twitter users decided it was time to log off for the day.

OJ Simpson joins Twitter three days after the 25th anniversary of the brutal "unsolved" (really heavy air quotes here) Nicole Brown Simpson & Ron Goldman murders. In his very 1st tweet he says he's got some getting even to do.
.
.
That's enough Twitter for today
See you Sunday pic.twitter.com/H2FisjyBRb

This is the REAL OJ account!!! Verification coming soon … can’t be without social media in this day and age. M. https://t.co/Oxtutu09Ld

@TheRealOJ32 has over 150,000 Twitter followers in less than 12 hours. Now who cares about even being verified. Living well is truly the greatest revenge of all! M.

On June 10, Simpson told the Associated Press that he is happily living in Las Vegas, where he plays golf on a near-daily basis. The Juice also added that he no longer discusses the murders and what became known as the “trial of the century.”

“The subject of the moment is the subject I will never revisit again,” Simpson said. “My family and I have moved on to what we call the ‘no negative zone.’ We focus on the positives.”