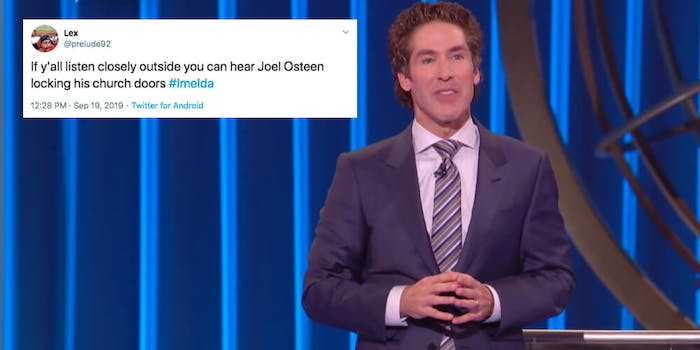 Why Joel Osteen gets cyberbullied every time Houston floods

When Tropical Storm Imelda hit, people flocked to social media to poke fun at the megapastor.

Legend has it, if you listen closely enough, you can hear megapastor Joel Osteen locking his church doors every time Houston, Texas, is engulfed in water.

Legend says if you listen closely enough during a storm you can hear Joel Osteen locking the church doors ⛈ pic.twitter.com/mFPuCczxBq

Meanwhile, Jim McIngvale–a.k.a. Mattress Mack, local Houston hero–is known for turning his massive Gallery Furniture store into a shelter for displaced Houstonians seeking refuge during the floods, which is becoming a common occurrence thanks to climate change.

Many criticized how long it took the millionaire to do so. “There was a safety issue the first day or two,” Osteen told CNN at the time. “We would never put people in here until we know that it’s safe, and it was not safe those days, let me tell you.”

Donald Iloff Jr., Lakewood Church’s chief of communications, told the Guardian at the time that Osteen was only receiving backlash because of the “haters.” “There are people who don’t like our ministry, don’t like Joel, don’t like Lakewood Church specifically. And then there is a significant portion of the population that hates faith and religion,” Iloff said.

People flocked to social media to poke fun at how Osteen would react–or not react, rather.

“Joel Osteen in a cold sweat watching the weather channel wondering if he’s going to be bullied into being a christian again,” Twitter user @lizhebert wrote.

Live look-in at Joel Osteen during the #Imelda flooding in Houston today. pic.twitter.com/KlunsdW8l3

And much quicker this time too. Blessed.

Lakewood Church is open to anyone in need of assistance because of the flooding.

We are located at 3700 SW Freeway. Lakewood Church is open now. https://t.co/rf3wSC7vLc

joel osteen said "y'all not about to make a meme outta me this time" lmao boys, we got 'em. https://t.co/7jq8uqf9Ah