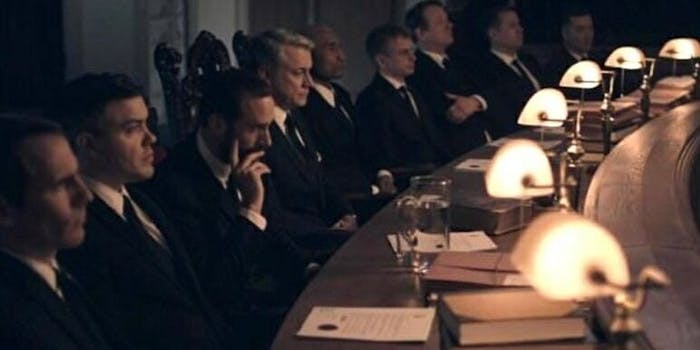 Yet another reminder we're already living in a dystopia.

If you were looking for a real-life incarnation of Hulu hit The Handmaid’s Tale, the Senate Judiciary Committee hearing involving Supreme Court nominee Brett Kavanaugh and Christine Blasey Ford on Thursday might have been the perfect parallel.

The Handmaid’s Tale, based on the 1985 novel of the same name, is a dystopian tale in which women’s rights have disappeared into a haze and where a class of women, called handmaids, are ritually raped and impregnated. Women in the show are second-class citizens, and after the 2016 presidential election, many pointed out that it’s perhaps more relevant than the creators ever could have imagined.

During Thursday’s hearing, a tweet from Aaron Fullerton made the comparison even more creepy—and for many, even more real.

One of these is from today’s hearing. The other is a still from The Handmaid’s Tale. pic.twitter.com/SXJ3d8XqAH

In case you’re having trouble figuring out which photo is from Thursday’s hearing and which is from The Handmaid’s Tale, the top image—picturing, from left to right, Republican senators John Kennedy, Jeff Flake (who had his own problems on Friday), Ben Sasse, Ted Cruz, and Michael Lee—is from the Senate.

Why is Ted Cruz on both panels?!?

Remember when the Handmaid’s Tale was fictional? #KavanaughHearings

Fullerton wasn’t the only one to notice the similarities.

Some Twitter users also mentioned that Rachel Mitchell, the Arizona prosecutor hired by the Republicans to question Ford, reminded them of Aunt Lydia, the character on The Handmaid’s Tale that works in the re-education school that teaches women how to be handmaids.

I've gotta admit, unveiling this new casting of Aunt Lydia in the middle of these hearings was an inspired choice.

The third season of The Handmaid’s Tale has already been announced. It seems the show’s the writers are really going to have rack their brains to come up with a storyline as chaotic as the scene from the Senate on Thursday.