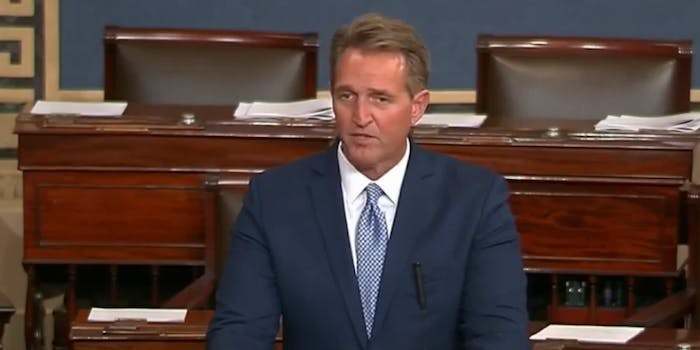 The two women spoke to Flake after he announced he would vote to confirm Brett Kavanaugh.

After stating that he would vote to confirm embattled Supreme Court nominee Brett Kavanaugh, Sen. Jeff Flake (R-Ariz.) was confronted by two survivors of sexual assault.

A CNN video shows two women who say that they are survivors of sexual assault confronting Flake in an elevator on Friday. One woman said that Flake is sending a message to women “that they don’t matter, that they should just stay quiet, because if they tell you what happened to them, you are going to ignore them.”

Another woman told Flake, “You are allowing someone unwilling to take responsibility for his own actions and unwilling to hold the harm he has done to one woman, actually three women, and not repair it.”

Flake is retiring at the end of his term after the November elections, and while he announced his opposition to much of what the president stands for, he has toed the party line on several crucial votes, including healthcare.

Flake was one of four undecided senators, along with Sen. Susan Collins (R-Maine), Sen. Lisa Murkowski (R-Alaska), and Sen. Bob Corker (R-Tenn.), who announced on Thursday that he would support Kavanaugh.

Activists have been protesting Kavanaugh since his confirmation hearings began in Washington, D.C., but recent revelations about his alleged sexual misconduct have made the stakes of his confirmation even higher. Flake’s Arizona office was beset by protesters Thursday in anticipation of his decision.

The American Bar Association said Friday that there should be a full investigation into Kavanaugh’s alleged behavior before a confirmation vote, and the Magazine of the Jesuit Order in the United States has removed its endorsement of Kavanaugh following several accusations of sexual assault.