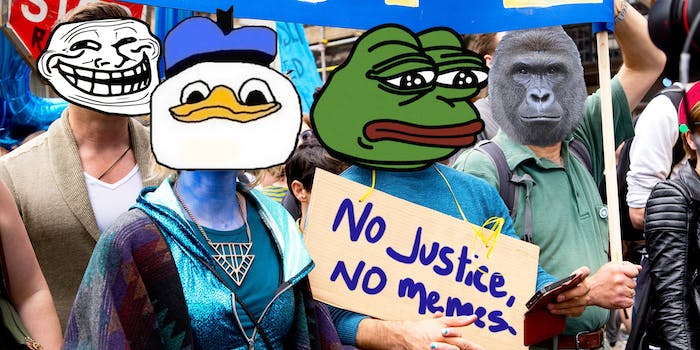 Zuxit, the great Facebook meme strike, is finally upon us

It's come to this.

For quite some time, the fans and administrators of what’s often categorized as “Weird Facebook” have been engaged in a game of cat-and-mouse with the platform on which they work their meme magic. Their pages have been deleted from on high, seemingly without warning, while apparent hacks, clickbait takeovers, and internal power struggles have also threatened the meme ecosystem, with users finding that Facebook offers little recourse to groups on the brink of self-destruction.

It was only natural that admins began to band together, first bombarding the FTC with complaints about the apparent bias or inaccuracy of Facebook’s community standards, claiming that gore and hate speech from verified accounts gets a free pass while harmless ironic shitposts get the axe. (In all likelihood, that’s because meme kids report each others’ content for a laugh, though other times Facebook seems genuinely confused, as when they continually struck down an image of a goose that looks to be—but is not—on fire). The Daily Dot reported on those complaints in August.

Shortly after came #TheZuckening, another concerted effort in which meme pages sought to report Facebook CEO and co-founder Mark Zuckerberg’s personal profile for a litany of violations—everything from abuse to spam to intimations of self-harm. This was mostly a symbolic gesture, as the meme admins acknowledged that you “can’t zucc the zucc.” Yes, “zucc” is no longer just a “succ“-style nickname for the man himself, but a slang term referring to the sudden, decisive deletion of a post or page.

As with many cultural protest movements, though, Facebook’s meme vanguard eventually decided it could only affect change by withholding the very capital they contribute to society. It was time to go on strike. To that end, over 100 meme pages with a total fan count upward of 10 million have committed to the Meme Alliance and #Zuxit, vowing to depart from Facebook much as the U.K. voted to leave the E.U. with a Brexit vote. 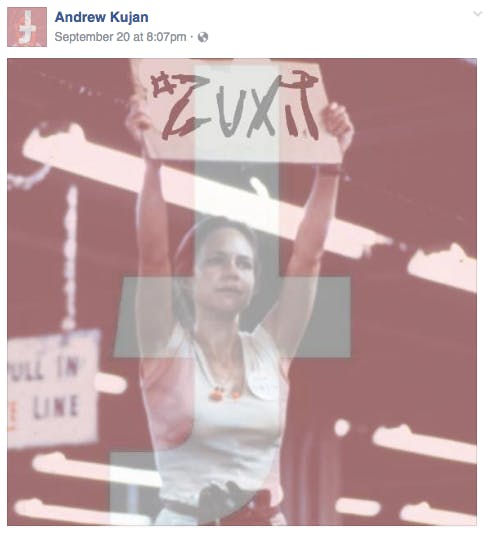 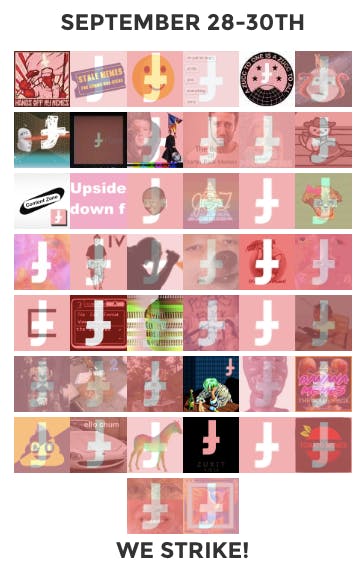 The now-familiar upside-down Facebook “f” on a pink background—in contrast to Facebook’s characteristic blue—continues to be the logo for this particular revolt. Only now, admins have promised, anyone branded with it is about to go invisible. According to the official event page, “numerous meme pages will temporarily unpublish in a coordinated blackout.”

Vow the organizers: “From September 28-30th, Facebook will be an even more boring place than usual.” Their grievances and ideological objectives are clear: “We hope to expose and make transparent the reporting and deletion process on the world’s largest social network, and show how it contributes to the censorship methods of the future.”

More tongue-in-cheek, meanwhile, are their demands:

We demand justice for the pages that Facebook has unfairly removed, and an answer for why other, more questionable material, is allowed to remain.

Facebook can avoid this historic smear in one way only: re-publishing the pages that have been deleted, and providing the admins of said pages with $1,000 worth of Lucky Charms marshmallows each. No oat bits. If we do not receive said demands, the #Zuxit will go on as planned.

The Daily Dot spoke to a group of admins on the eve of their biggest protest yet to get a better sense of their strategy and expectations.

“My hope for Zuxit is to at least get the zucc to notice were fed up with the broken report system,” said Andrew, an admin for Hot Dogs In Unusual Places. Others echoed this sentiment, pointing out once again how Facebook tends to allow objectionable content to remain on the site even after complaints. “I have reported flat out child porn and fb hasn’t taken it down,” said Rebecca, admin for Girly Bullshit. Renée, admin for Vaporcult, said she would like to see Facebook “pressured to reevaluate their community guidelines and rewrite them in a way that is clear,” adding that “[w]ithout clarity, rules and guidelines are impossible to adhere to.”

This gets to the heart of current angst in the memeosphere. A single problem—the opaque Facebook bureaucracy, in which it’s unclear where and when actual humans are involved over and above “algorithmic-based censorship,” as the anonymous admin of I play Korn to my DMT plants put it in our conversation—has resulted in two problematic outcomes: On the one side, disturbing content gets a free pass, and on the other, innocuous material gets zapped with no accountability. The center cannot hold.

“The UX support platform is an endless loop,” Renée lamented, “disconnected phone numbers and bugs, you can never speak to a human being on the phone. You’re lucky if you even get an automated response.” Jawn, admin for Shithead Snake, recounted a similar experience: “I reported a video of a cat being burned alive 4 times and every time fb got back to me within minutes basically telling me they’ll allow it.” (As with previous articles on this subject, the Daily Dot has reached out to Facebook’s press team and is still awaiting any comment whatsoever.)

“We don’t think our disappearing meme pages are facebook’s most significant injustices,” Korn’s admin said, alluding to these other issues. “But we are a group that can say that, on a site where no one has power, we actually do.” Other admins agreed that the absence of their pages, even for a few days, will have a significant impact on Facebook as a whole. Renée pointed out that “memes are the most valuable content on the Internet, from a business perspective. They are pieces of culture that are inherently designed to go viral.” Given that “platforms rely on content to sustain user engagement” and “Facebook monetizes all traffic through ads,” she said, they ought to take an interest in creators’ critiques of their policies. 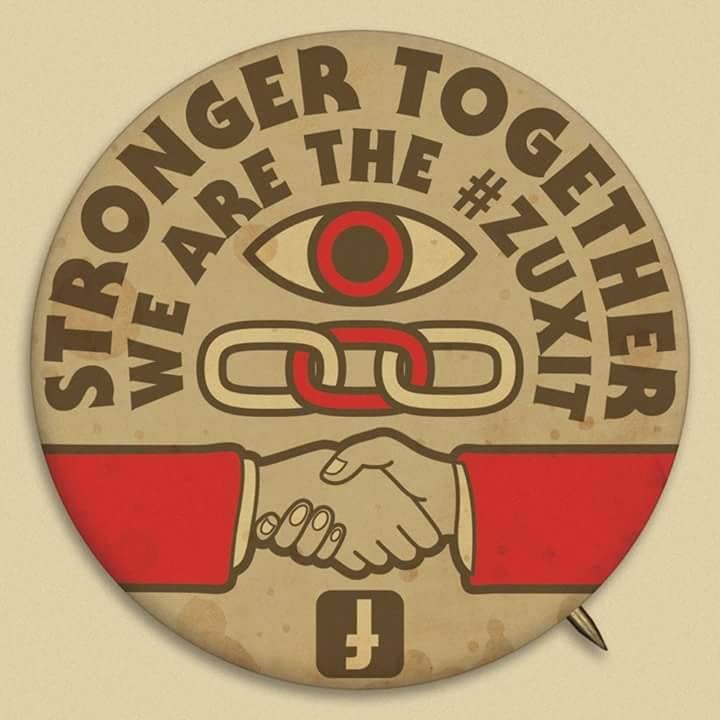 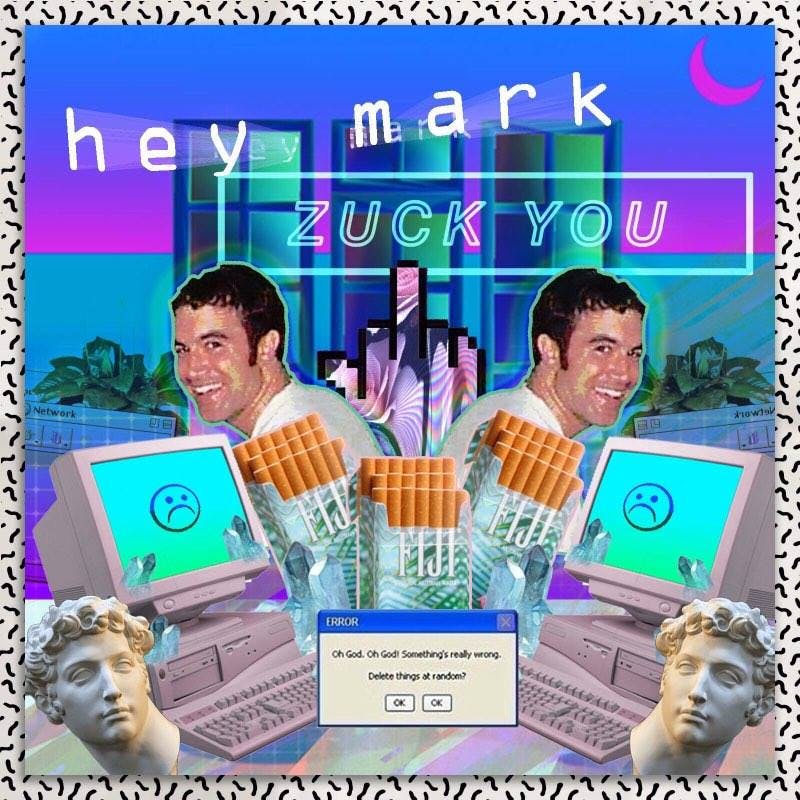 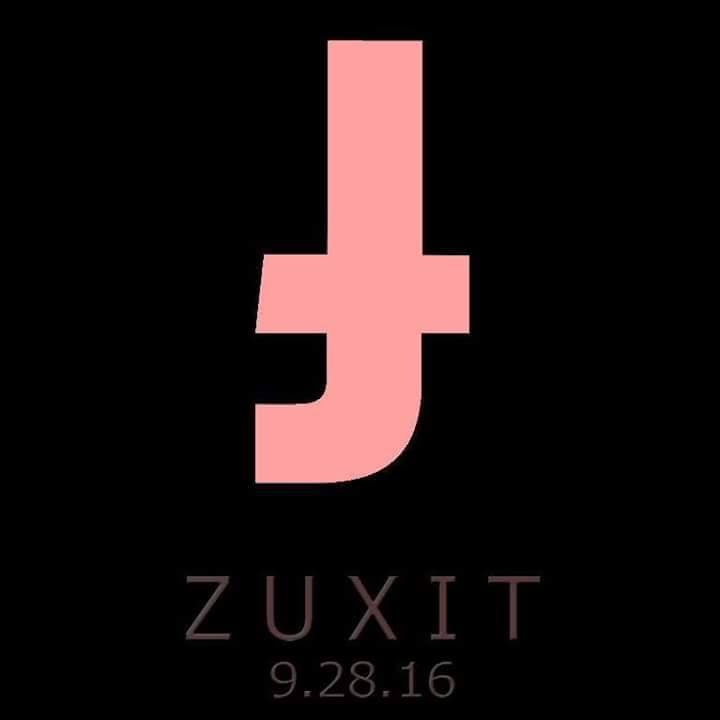 Jawn said that Zuxit “should reduce shared content by a ton,” while Korn’s admin called it a “little muscle flex.” Andrew said, “Our collective reach is huge. People have to notice,” noting that Facebook will be “very boring” without the typical daily activities of the Zuxit crew. Renée argued that Facebook is “in many ways creating an environment that is hindering the creation of new content, forcing creators to move to other platforms.” Rebecca considered that a precarious position for the tech giant: “[A]t this point Facebook is really just a meme and news sharing machine,” she said.

And when the meme pages come back online on Sept. 30? “We come back like we just won ww2,” Korn’s admin said. “I plan to exaggeratedly self congratulate. We will ride back on our horse emoji and people will fill the streets and burn down the palo alto headquarters.” Jawn predicted that “we will all be making content for those 3 days. So when we come back, it’ll be an extravaganza.” Others said it was up to other users and meme fans to decide what impact the Zuxit action would have.

Meanwhile, not a few people have—seriously or not—raised the issue of money on the Zuxit page. “#Zuxit to get paid for producing content,” wrote one attendee, “Facebook as a worker-memer-owned company with dividends for all.” Another pointedly asked, “Why not go all tha way and protest to GET PAID FOR MAKING CONTENT idiots.”

Considering that Instagram, YouTube, and Vine stars are often compensated, it’s not that absurd a proposition. But the meme admins mostly brushed it off.

“Getting paid is a plus to me. Yes I would love to get paid doing something I love, but it’s hard out here for a meme,” said Jawn. “I’m just here solely on the basis of an open market of ideas/memes,” said an admin named Luke, adding, “I don’t think most any in this movement are here for money.” Still, none could demand the potential upside for everyone. “I think it would increase engagement on the platform if contributors had an opportunity to get paid for what they do, absolutely,” Renée pointed out.

In any case, such considerations are still a long way off. At the moment, Facebook’s meme pages just want to survive their puzzling persecution. Attention and validation would be more than enough. “We’re all sad sad children that want a pat on the back,” quipped Rebecca. “Give us a participation medal and a Capri sun Mark!” said Renée.