It’s hard to overestimate the impact that The Simpsons—particularly the first dozen seasons or so—has had on popular culture. Two decades after the long-running cartoon’s heyday, its funniest moments are still fodder for all kinds of online hijinks, from chill YouTube subgenres and parody Twitter accounts to news station pranks and plain old reaction GIFs and screencaps.

Then there’s Simpsons Shitposting, a Weird Facebook group with a staggering 150,000-plus members. It might be simplest to explain the page as a place for Simpsons memes, but that doesn’t quite speak to the essence of “shitposting,” which encompasses content of aggressively, ironically, and trollishly poor quality. Incoherent jokes, hasty Photoshopping, mashups, irrelevance, errors in spelling or grammar—all are hallmarks of the shitpost, as seen below: 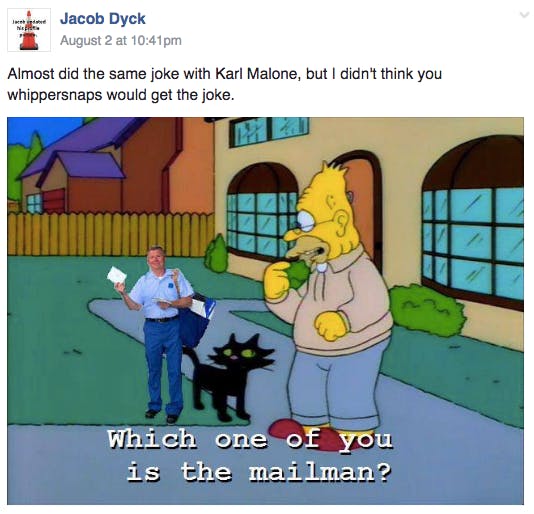 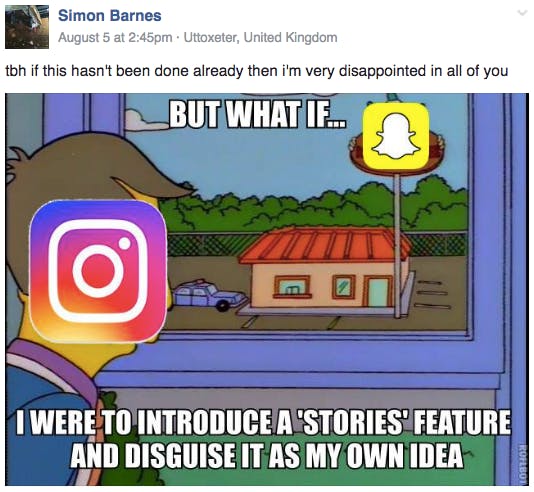 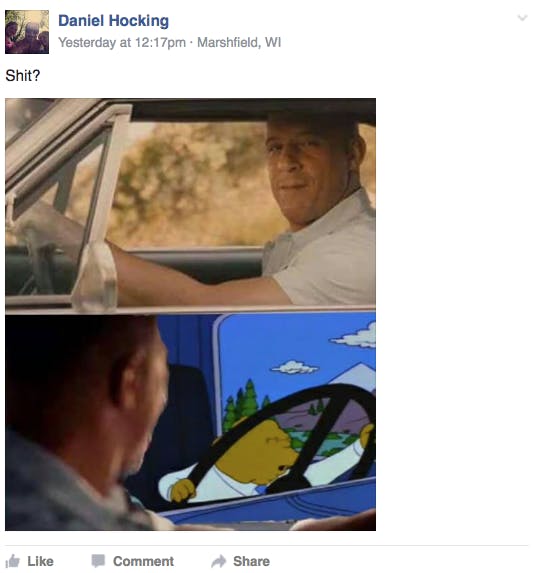 With all these cross-currents, a Simpsons shitpost can be very funny indeed, so long as you have an eye for episode context and a wealth of basic meme trend knowledge. So it’s no wonder the page is so popular.

But recently, things took a strange turn. When you visited Simpsons Shitposting, you’d see fewer Simpsons-related posts and a lot more stuff like this: 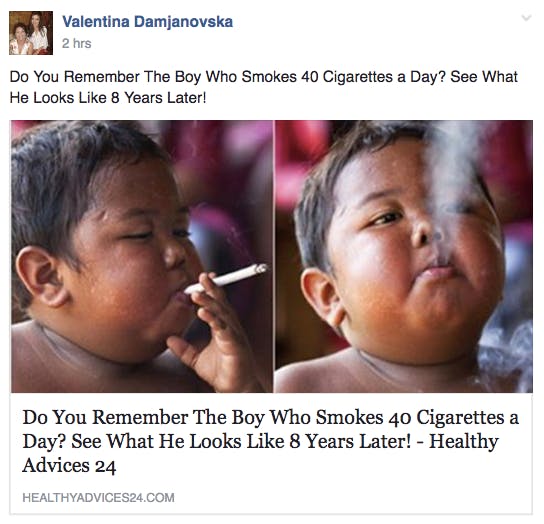 What happened? Admins and Simpsons Shitposting members told the Daily Dot that the page’s creator, a mysterious and by some accounts intimidating figure who goes by Geddy Lean Johnson on Facebook, sold control of the page to a Macedonian company interested in the page’s large audience and high engagement. It’s the Facebook equivalent of spam email, with pages subscribers instead of Hotmail addresses, except users don’t have to buy anything—just clicking on the page’s links generates revenue through ad impressions.

These spammers, however, were less than prepared for the trolls who awaited them. “The Macedonians noticed the large headcount of members in the group,” said Marie Nolan, a page admin who often uses a male pseudonym on Facebook. “They approached Geddy and made him a dismal offer of $3,500. Apparently they Skyped before the purchase was made. … I researched the company for him, warning him it might be a scam.”

Facebook’s terms of service don’t explicitly prohibit the selling of pages, but it does note, “Name changes and merges must not result in a misleading or unintended connection and must not substantially change the Page’s subject matter.”

But Geddy would not be deterred and even went so far as to “test out the results” of some clickbait spam himself—with poor results. Ashley Callihoo, another admin, said her fellow admins barely reacted, however: “I was talking to one of the old admins and he was fully on board with [Geddy] until he got kicked from the original group,” she said.

The bans came down, she added, when “people from the group started reporting the new admins’ posts as spam.” Geddy’s response to the outcry was unambiguous: “Fall in line or fuck off.” This authoritarian pivot was itself widely satirized in further shitposts as splinter groups—including SIMPSONS SHITPOSTING, Four thousand dollars Macedoniaposting, Simpsons shitposting II, and Geddyposting—began to appear.

Callihoo decided to form her own offshoot, Simpsons CRAPposting, “and in the process got banned from the original group,” she said. 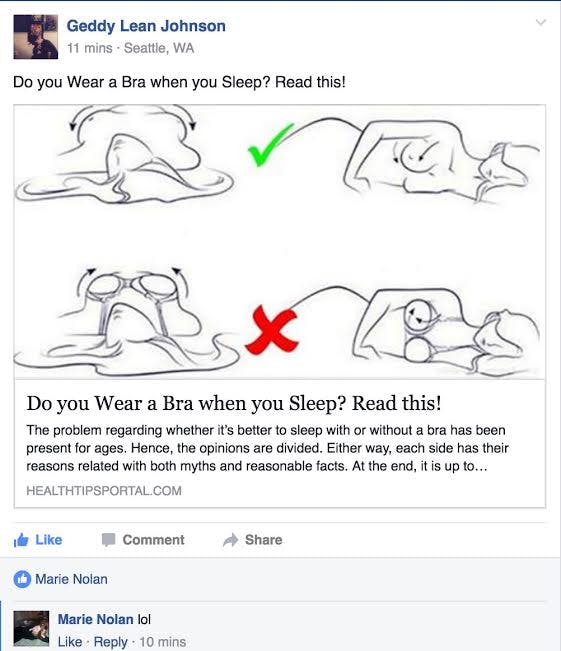 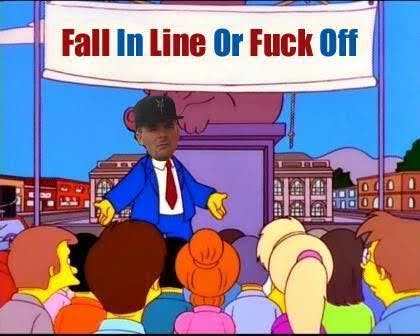 The trolling and shitposting simply accelerated from there. The shady Macedonian company was getting no return on its investment and was instead deluged with abuse from members who wanted them gone. Many posts at this juncture directly referenced the takeover with clickbait-style headlines. Within hours, the new owners were apparently ready to delete the page and negotiating with Nolan and others to sell it back at a steep discount. 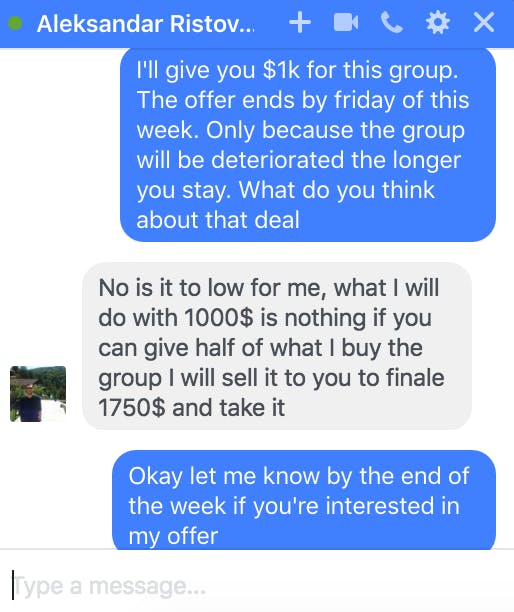 In the end, order was seemingly restored by a Simspons Shitposter known as Tea Black, who claimed they had bought the page back from the Macedonians for $1,200 (or 1,200 “dollarydoos,” as any fan of the classic episode “Bart vs. Australia” would say). The same user set up a GoFundMe to recoup that fund, and shockingly enough, over $1,000 has been raised. 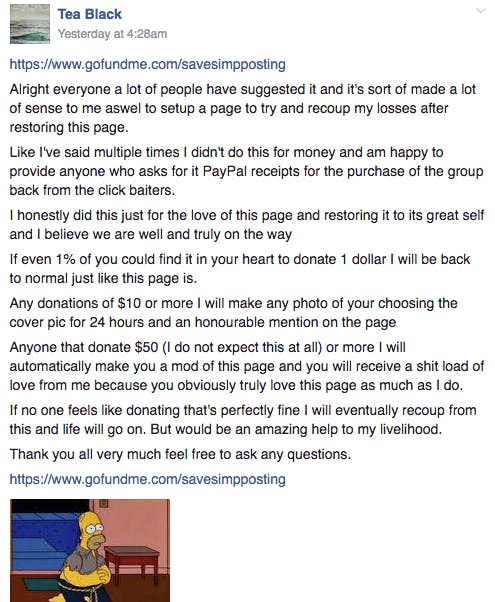 Tea Black wrote a heartfelt explanation of the campaign:

For those of you who aren’t aware a little while ago the page Simpsons Shitposting (one of the greatest pages ever made) was sold off. Unfortunately for the 150k+ members it was sold to a group of people that wanted to only profit from it and ruin it’s very soul.

Fortunately for this group I was able to contact the new owner at a time when they were completely ready to destroy this page because it wasn’t making them money and came to a deal to be able to purchase before they did.

I purchased the page for $1200USD ($1600 AUD)
Which is a far cry from what it sold for originally but I didn’t really have a lot of money at the time and had to really negotiate the price down to even be able to just barely afford to buy it . But I honestly felt it was worth it to try and restore this amazing page to what it once was. I didn’t do it for profit or to make anything out of it at all I just did it because I truly love Simpsons Shitposting and couldn’t stand to watch it burn to the ground.

This being the reason why I am being completely honest about what I paid because I’m not trying to make money from this at all. I’m just trying to get my life back to normal along with this page.

If any of you amazing people could find it within your hearts to help me recoup from this loss that I have even $1 I would be forever greatful and will mention a few things I will be willing to reward people with on the page.

The money came pouring in, in sums as generous as $50 a pop, along with plenty of Simpsons quotes and references: “Simpsons Shitposting; it was the best of times, it was the blurst of times. Thanks for saving it,” wrote one donor. “You truly are the king of memes,” quipped another.

While it may be strange to see an irony-addled meme clique come together to preserve the archive of their shitposts, it could be something we see more and more as Facebook pages run afoul of the company’s censorship systems, mount offensives against Zuckerberg et al., and fall increasingly prey to elaborate spam takeovers. The admins of these groups address legions of fans; when their collective focus is harnessed and trained on a singular goal, the results can be simply extraordinary.

Of course, there’s always room for cynicism, too: 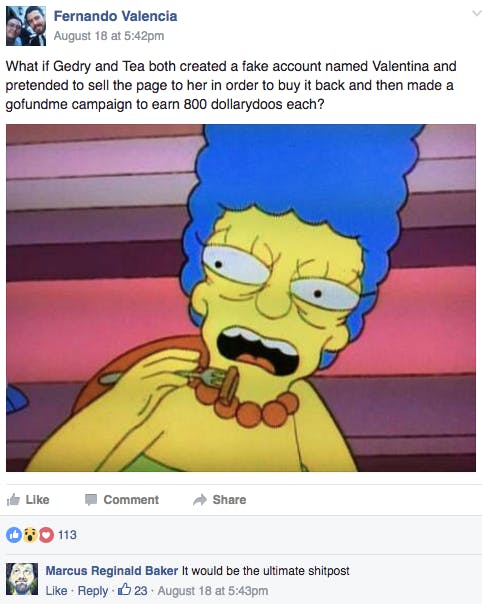 For now, though, it seems that everything’s back to normal—just as our favorite sitcom would have it.