Scroll through the New York magazine’s “The Rise of Weird Facebook: How the World’s Biggest Social Network Became Cool Again (and Why It Matters),” and you’ll notice a recurring theme: Many of the embedded images fail to load, and in their place is an error message from Facebook:

A previous Daily Dot article noted that “Weird Facebook”—a loose knit network of content creators, artists, writers, social media influencers, and political progressives—“shouldn’t exist.” Facebook’s policies seem antithetical to the organic development of a far-flung, dynamic community of cultural creatives and online personalities. Users are discouraged from adding friends they do not have close offline connections to. Facebook creator Mark Zuckerberg’s last name has even become a verb, “zucked,” meaning: “to have one’s account suspended for, like many artists, publishing under a pseudonym.” That the platform has become culturally relevant again may be, in some way, despite its own best efforts.

And now, it appears as if the social network is cracking down on some of its most anarchic and interesting group. That standard error message above now recurs often across the internet because Facebook recently deleted a number of notable and popular meme pages maintained by its alternative communities, including “Cabbage Cat,” “Gangster Popeye,” and, for a time, “I play KORN to my DMT plants, smoke blunts all day & do sex stuff.” 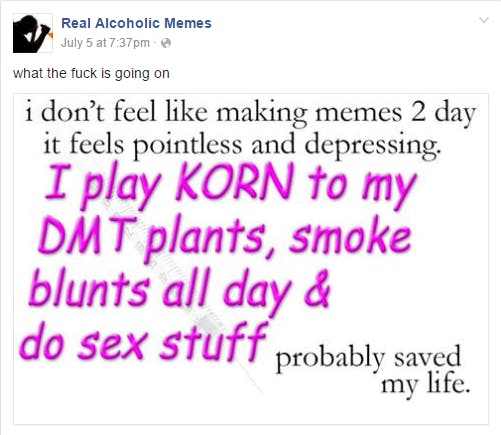 Cabbage Cat had about 75,000 followers on Facebook at the time of its disappearance (and has more on Instagram). There have been 10 or so spin-offs of Cabbage Cat, mostly in the form of “vegetable animal” pages like Lettuce Dog. Cabbage Cat hosted the type of image macros popular on Instagram—images captioned with text above them in the style of a Twitter screenshot. Cabbage Cat creator John Trulli said that he started making these macros “to make fun of memes… [because] they were annoying”.

“As if I’d really be trying to convince anybody that the President of the United States had taken over my meme page,” complained Gangster Popeye creator Rain Terranova.

These narratives, of a hostile force taking over, are fairly common on Facebook humor pages (e.g., “Auntie Kayla” on Baby’s Names). When Rain was asked if there was any chance that someone might interpret this as a good-faith effort to impersonate the sitting president of the United States, she responded, “the President is a bad man who hates memes; I will leave it at that. I’m not saying he is in cahoots with Zuckerberg to take down meme pages, but I’m not saying that’s not the case either.” Given the amount of time it took to create Gangster Popeye, Rain is overwhelmed by the prospect of attempting to either rebuild the page on Facebook or to migrate to another platform with more laissez-faire moderation policies, like Tumblr or Twitter.

Cabbage Cat, on the other hand, is already on Instagram and Twitter, and John Trulli has recently made a Cabbage Cat 2 page on Facebook (though it currently has less than 2,000 “likes”). Trulli said that he is not interested in trying to focus his efforts on platforms with less erratic moderation regimes because “all social media is temporary.” In order to steer clear of content deletion, Trulli has considered cutting back on the white people jokes.

“In the future, as funny as some of them are, I think I’ll stop poking fun at Caucasians like myself, because we are always so fragile,” he said.

A social media account’s reach, of course, is not just a measure of the level of cultural influence it has online; it is also a material resource and has material costs, in terms of hours of raw labor. People, and corporations, put a great deal of time into creating and publishing content—and building an identity or “brand” on these platforms. And in many cases, businesses value so-called “social media influencers,” recognizing that their reach is an asset.

John Trulli has begun to supplement his income with Cabbage Cat, though he has stated that after a year of work, Cabbage Cat has just begun to grow to a point where it can begin to be lucrative. Trulli asked, “Am I charging $200 to post on Instagram, or am I charging for the year of creative output and networking it took to get me in that position?”

Facebook’s arbitrary moderation policies, existing in tension with its own communities’ cultural relevance, show little regard for the value of its content creators’ and influencers’ work. “I put hours and hours of my life into that page,” said Rain Terranova, “and they took it from me without a warning.”

Trulli described a similar experience. “Honestly there were no warnings or emails,” he said. “I didn’t notice [Cabbage Cat] was down until a fan notified me. I talk to tons of other page owners and they say you usually get warnings and strikes.” 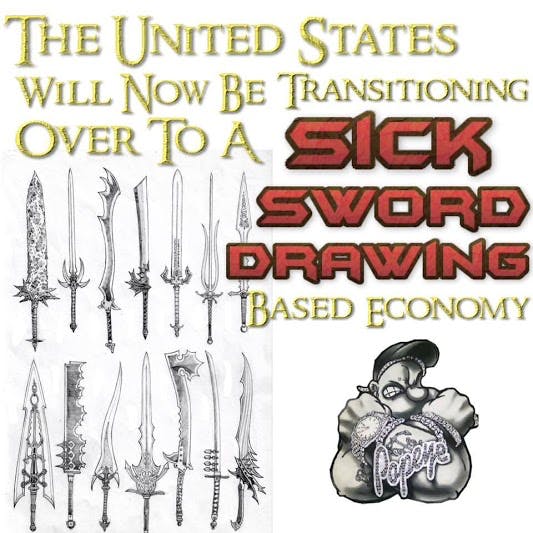 When a social content publishing platform is provided to a user for free, it is funded by the value the user brings to the platform—as a viewer of advertisements, source of marketing data, or, in the case of influencers, creator of a specific audience. And content publishing continues to migrate more and more to social networks. Publications like The Awl and Pacific Standard, for example, have moved to Medium.

Ultimately, users, as a major source of a social network’s value, become frustrated over the lack of certainty as to whether or not the platforms they have built upon will continue to exist from one moment to the next. (Dennis Cooper, for one, is contemplating suing Google after it erased over a decade of his work from its Blogger platform). That users do not have sense of data and/or brand security on social media is, perhaps, a flaw of the contemporary internet which happens to be felt most acutely on Facebook, where moderation is especially unpredictable. Something the admin of Shit Memes told the Daily Dot in 2014 still rings true:

“Facebook is not the forum for this kind of shit at all.”