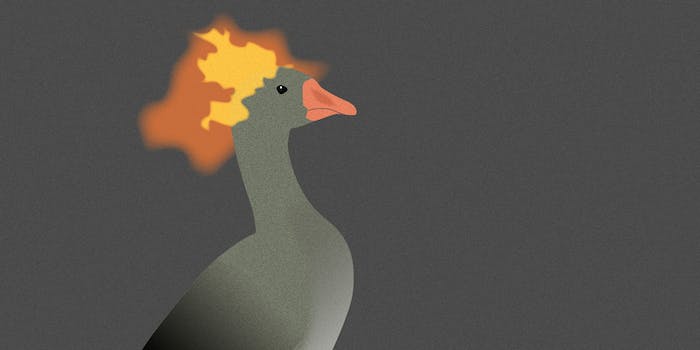 It's not really on fire, Zuckerberg.

Every once in a while, a meme so bright comes along that its beauty illuminates the internet. Unfortunately, Facebook is trying to keep one very lit meme locked up like Rapunzel in a tower.

This tale starts back on December 5, 2010, when Deviantart user Matoroignika uploaded this “pretty darn cool shot” of what appears to be a goose on fire, which came into the digital world with the title “Fire Duck,” since that apparently had a certain ring to it. 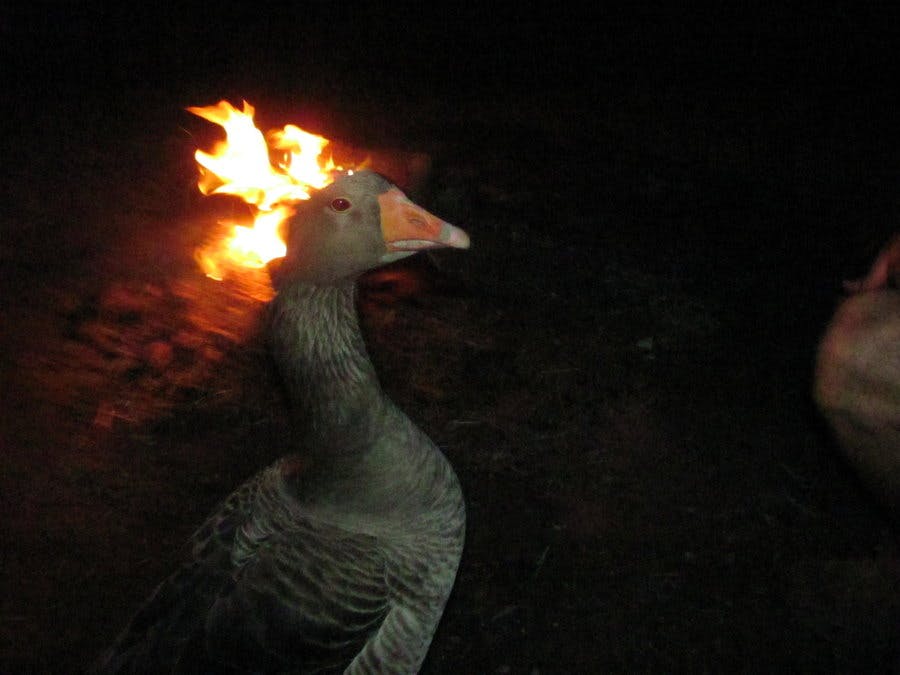 But the fiery crown is simply an illusion created by the bird running in front of a campfire. In reality, the goose was about to run straight into Matoroignika, and as he quickly moved out of its path, he captured the snapshot. And voila, it looked like the animal was one of Hades’s messengers.

It’s unclear what exactly happened to the goose afterward. But while the whereabouts of the flaming fowl may be unknown, its likeness would eventually gain notoriety across the internet kingdom.

And like many images living online, “Goose on Fire” would stay dormant until it found its heyday nearly half a decade later. As Know Your Meme points out, the goose only really caught fire online in 2015, when Facebook pages like ‎أتاري // Asperger Boy 9000 //‎  posted the picture. 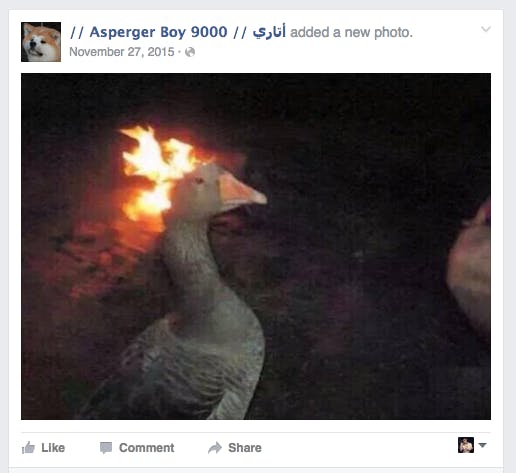 Late last year is when Goose on Fire began to find its stride. It found itself on practically all social media networks, inspiring various transformed works and memes.

Goose on Fire was even the muse for Ducky-D’s 45-minute banger “It’s Duckin Lit.”

When auto correct change shit to "its Ducking Lit!!!" pic.twitter.com/zRlsb30OtE

And like most memes, Goose on Fire eventually fizzled out over its run of a couple months. People obviously remember the enchanting image of the flaming feathered creature, but the obsession had calmed—that is, until something peculiar began happening on Facebook.

In order to see the meme, Facebook users must click through a screen that reads, “This photo was hidden because it shows mature content, such as graphic violence.” 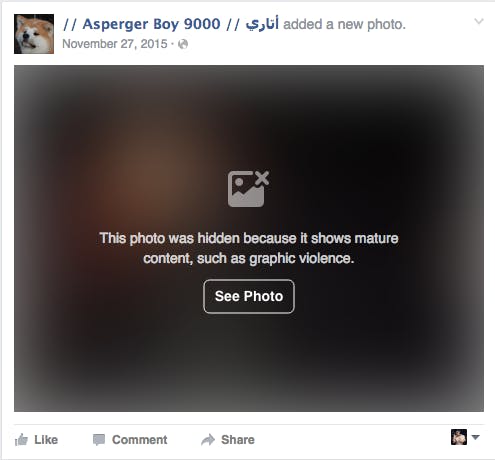 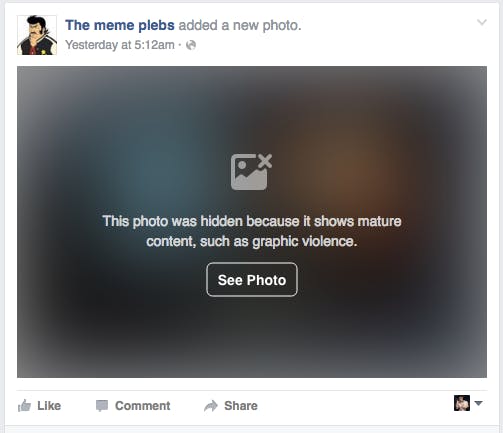 Facebook gives some insight on what you shouldn’t be posting on its Community Standards page. It says:

We want people to feel safe when using Facebook. For that reason, we’ve developed a set of Community Standards, outlined below. These policies will help you understand what type of sharing is allowed on Facebook, and what type of content may be reported to us and removed. Because of the diversity of our global community, please keep in mind that something that may be disagreeable or disturbing to you may not violate our Community Standards.

This is definitely a little confusing, as the goose technically isn’t on fire, its burning halo simply a trick of the eye. There’s lots of actually questionable content on Facebook that moderators should be taking precautions with instead of Goose on Fire. What about hate speech from your unwoke cousin? Or nudity that’s less artistic and more pornographic? Oh, and how about people’s scary-looking babies? OK, that last one might not be in the same category, but you get the point.

Facebook doesn’t want you to see this goose on fire meme. The meme kids have interpreted this as Zuckerberg‘s personal war against the bird, which of course has sparked a new crusade of memes poking fun at the Facebook founder. Some have been able to fly under the radar of the censor, but it’s only a matter of time before Facebook finds and flags our dear Goose on Fire.

Meanwhile, some people have also returned to the original Deviantart post to pay their respects to the goose and mock the unfair suppression of its meme magic on Facebook.

So what’s the deal, Facebook? Can’t you just let the internet enjoy their memes in peace? We all know that censorship doesn’t end well for the powers putting it in place. And hell hath no fury like a Goose on Fire.