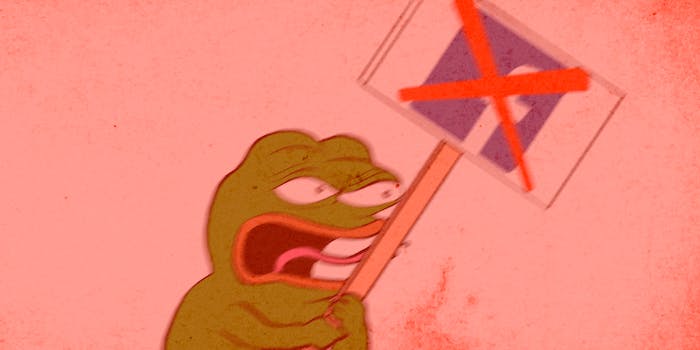 They may take our lives, but they'll never take our memedom.

As the dank memes of Weird Facebook continue to filter into the mainstream web, sowing laughter, confusion, and fury in almost equal measure, the admins and followers of pages like “Everything Is a Social Construct” and “Nihilist Memes” are gearing up for war.

This time, their target is not the “normie” outsiders who have diluted and damaged their meme aesthetic, but Facebook itself.

As these surrealist, irony-fueled pages grow, they face an increasing risk of swift deletion—often, admins claim, without warning or due recourse. The anarchic element of meme culture ensures that posts will get flagged as offensive and inappropriate. These complaints then take a mysterious route through Facebook’s corporate interface and are somehow judged legitimate or not, by human or algorithm, and a summary action is then enforced.

That may annoy meme fans, but as Facebook is a publicly traded company, it is not exactly obligated to reform this system unless, say, it somehow reflects the interest of shareholders. The real issue, as a meme activist who goes by the pseudonym Guillermo Thomas told the Daily Dot, is that verified pages “operate under a different set of standards.”

“Pages like Tila Tequila and Tess Holiday, for instance, post objectionable content that is either never removed, or the pages never get unpublished. Tila Tequila posted multiple posts on Hitler’s birthday in earnest tribute, and while the posts were removed, there was never any consequence.”

These perceived biases—and Facebook’s apparently inconsistent claims to have “reviewed” reported content, given the amount of gore and abuse that filters through—are the grounds for what could well be the first mass political demonstration by a united meme front. The initial stage of the revolt, designed to generate buzz and solidarity, called for the use of an inverted Facebook “f” on a red background as a profile photo overlay.

Friday 2PM CST use this overlay on your profile pic

This is in preparation for participating meme pages to post a simultaneous, prewritten call to action at 2pm CT on Friday, Aug. 12. It reads in part:

“You already know that Facebook has been deleting a number of pages for arbitrary reasons and since there’s virtually no other social media platform to jump ship to the pages that are still operational have decided to take action and hit back before we inevitably get unpublished.

“This page and many others are simultaneously posting this message in order to rally fans to file FTC (Federal Trade Commission) complaints against Facebook for ‘fraudulent’ content review policies and a misleading community guidelines. The FTC is a governmental entity that regulates private companies and protects consumers against fraud and monopoly, so let’s give zucc a taste of his own medicine.”

The petition goes onto enumerate the grievances outlined earlier in this article: that “Facebook claims that content has been reviewed when it clearly isn’t”; that “[v]erified pages appear to operate under a different set of standards,” contrary to the corporate line; and, ultimately, that “Facebook’s statements are fraudulent and meant to pacify consumers.”

Readers are then encouraged to write individual complaints and send them directly to the FTC, though there is a final caveat to the post:

“This may not make a difference, and it sounds a bit cringey, but consider it a symbolic gesture and show of solidarity among dozens of meme pages and the ironic meme community as a whole. So as much a longshot as this is you can be a part it, and honestly we need as many people as possible to participate.”

Thomas told the Daily Dot that a number of meme pages with significant audiences plan to participate in this effort, including:

Everything Is A Social Construct (59K)

Antisocial Lads With A Desire To Get Laid (23K)

Asked about how this plan had been organized, Thomas said it simply snowballed after he filed an FTC protest on Tuesday, then told admins at Everything Is a Social Construct. They liked the idea, and in fact, some likeminded folks had taken similar steps to lodge grievances, so he told other pages’ admins about it, and, well—you know how things go viral.

But Thomas doesn’t own or operate any page himself, he said: “I’m sort of a man without a country right now, after my last two pages I created, Creepy Old Dudes of Mattybraps (dedicated to exposing rampant pedophilia on teen music pages) and Mark Zuckerbergs Dead Kid Picture Stash (calling out Facebook’s community standards hypocrisy) were nuked by Facebook.”

“Ultimately I don’t think the FTC would take action […] but this shows a lot of unity among the meme community that has had their content stolen, reported, deleted, etc.,” he added. “FB has engaged in a meme page genocide, and we’re finally going to fight back. It’s mostly symbolic, but brings attention to a problem encountered by admins of every page.”

That sense of persecution, justified or not, accounts for the number of admins linking to “backup” clones of their original pages. In 2016, getting shut down by Facebook is seen as the inevitable, rather than possible, price of indulging in dank, edgy, twisted, or otherwise satirical memes.

As Thomas noted, this form of retaliation against Facebook’s crackdown is almost certain to be ineffective—but could it get their attention? We’ve reached out to Facebook reps for comment and will update if and when we hear back. But until then, hold your memes tight and brace for the worst.

Update 6:42pm CT, Aug 12: This piece has been updated to clarify that Facebook is a publicly traded company and not a private company.