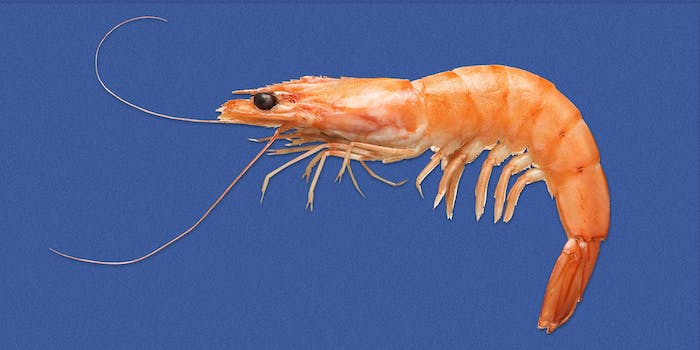 It's just scams all the way down.

Weird Facebook exists as a celebration of the bizarre world of dank memes. What’s hidden behind the scenes, however, is weirder than any image macro brought to life.

A few days after Daily Dot readers came to know the saga of the Where my shrimps Facebook page turning from crustacean meme kingdom to clickbait wasteland, the narrative drastically changed. No, Where my shrimps are not becoming sympathetic to lobsters lobbos. Admins are instead doubtful that the alleged hacker known as Squishy is the person who brought down the original page in the first place.

Squishy chatted with admins, who pushed them to reveal that they are not the hacker. It appears as if either Squishy knows of the person who hijacked the page or promptly handed off access to someone else. A Facebook employee’s reply only further muddled the issue at hand.

Speaking on background, the employee said the page was not hacked, per se, as there was no brute force attack. Instead, the page owner added an admin who was given all attendant permissions—which they then used to remove all other admins, taking sole control of the page. It appears, they said, that the admins had offered to sell the page to this person, which is against Facebook policy. But since the original owners voluntarily granted access to the newcomer, the company is limited in how they can respond.

Given the incredible lengths that Where my shrimps admins have gone to recoup artwork, poems, and memes, as well as the fan campaign that successfully brought down the original page (albeit briefly), something seemed amiss. I reached out to the admin known as “Hank,” who submitted the page’s support tickets and kept correspondence with Facebook to try connecting these disparate threads.

“So you’re saying the original creator of our page was trying to sell it? Honestly it’s news to me,” Hank said, adding that he and his fellow admins hadn’t been in contact with Where my shrimps’s originator. “We have the original page name back as the original page is now banned and deleted. But we have no clue who ran it while it was up since [Squishy] apparently wasn’t the hacker, but was instead some kid trying to steal the limelight.”

The takedown of the original Where my shrimps page was a short one, though it proved the power of fan engagement. Following the announcement that the original page and its /45krisk URL had resurfaced, fans sent photos of notifications they’d received from Facebook stating that the page had been removed per their request.

Calling on Where my shrimps fans to barrage the hijacked page with complaints is a strategy admins are once again returning to, along with fan-launched campaigns like #FreeShrimpo.

Hank said that since the original name has been absorbed by the Where my shrimps 2 group, old fans have returned and engagement is on the rise. So, too, is new shrimpy content. Facebook Live streams with admins have been interwoven with shrimp lore videos, pulling together a mythos that extends far beyond the shrimps-lobbos rivalry.

The bolstering of the Where my shrimps brand goes hand-in-hand with clamping down on security. Where my shrimps is making moves and employing Facebook’s own tools to not only better maintain the shimpire but prevent additional problems.

“Make sure all the admins of said page have two-step verification on,” Hank explained when I asked for security tips. “And for the page in general, I’m not sure exactly how it works as I’m not the admin who set it up on our page, but linking your page to a business manager helps everything stay in check.”

Though the Facebook employee I spoke with was unable to shed much light on this particular case of questionable ownership and intentions, I did get some questions answered about security—specifically, what Weird Facebook groups and pages can do to prevent a clickbait hijacking.

The employee also pointed to the importance of differentiating roles between admins. For groups, that means deciding whether someone should be handed the full set of keys as an admin or instead act as a moderator. Moderators cannot add or remove those with managerial access and are unable to alter group settings. Only those with admin access can change a group’s name or privacy setting.

Pages have a separate multi-leveled system of access, with analysts at the bottom of the totem pole. Those with analyst access are only privy to insights and post author information.

For more egalitarian folks, the multi-tiered access may not be ideal. And, unfortunately, Facebook offers little else in terms of help here, especially when it comes to the anarchic pages of Weird Facebook. The documents I received were explicitly billed as advice for small businesses and included links that were no longer valid in Facebook’s Help Center.

Where my shrimps may never discover the true identity of the person or group who hijacked their page. Its clickbait corpse may continue to rise up like a zombie with brains on its mind.

Whatever the case may be, the one constant in the struggle to keep and maintain creative meme pages and groups on Facebook has been the company’s inability to address the community’s concerns. That’s of little concern to Where my shrimps, though. Chasing shrimps is something that cannot be confined to just Facebook.

Admins launched a petition lobbying for a live shrimp emoji. This follows a petition begging Facebook to return their page. Unlike their last efforts, this petition will be sent to Apple HQ upon reaching its signature goal.