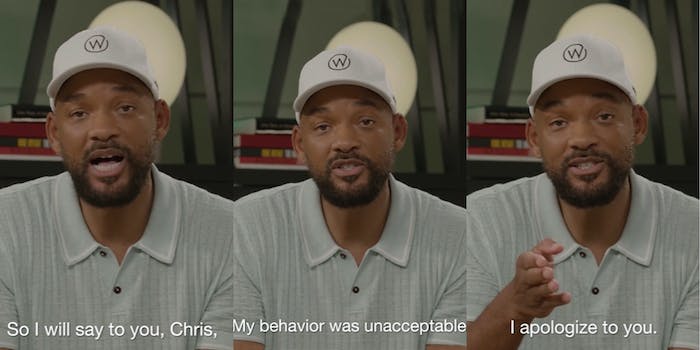 ‘My behavior was unacceptable’: Will Smith posts apology for Chris Rock Oscars slap

Will Smith chose today of all days to release an apology video, four months after he slapped Chris Rock at the Oscars.

In the nearly six-minute video, he starts by answering a question about why he didn’t apologize to Rock during his Oscar acceptance speech that night. He says he’s reached out to Rock, but “he’s not ready to talk.” He also apologized to Rock’s mother.

“There’s no part of me that thought that was the right way to behave in that moment,” Smith says of the slap. He also claims his wife, Jada Pinkett Smith, had nothing to do with the incident, and he apologized to Questlove for overshadowing his Oscar win for Summer of Soul.

Of course, quite a few people wondered why he picked today—the long-awaited release date for Beyoncé’s Renaissance—to drop this mea culpa.

According to US Weekly, during a standup show in New Jersey last Sunday, Rock joked about the slap. He reportedly said that while the slap stung, “I shook that shit off and went to work the next day. …I don’t go to the hospital for a paper cut.”