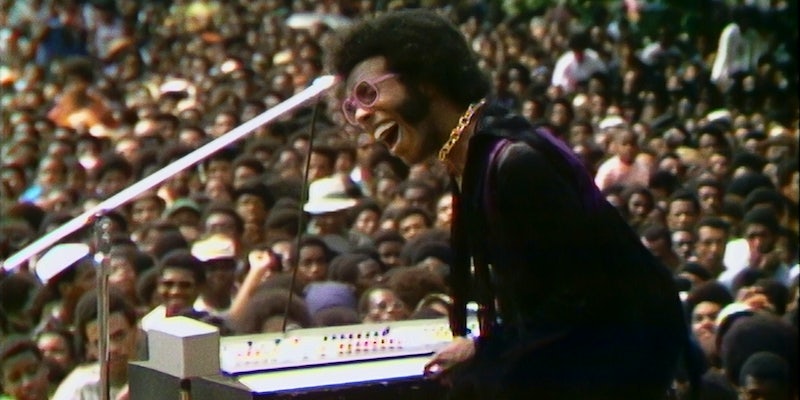 It took over 50 years for the footage to finally see the light of day.

Summer of Soul (…Or, When the Revolution Could Not Be Televised)

Release Date: July 2, 2021
Director: Ahmir “Questlove” Thompson
Streaming: Hulu
‘Summer of Soul’ brings the Harlem Cultural Festival—a six-week concert series that took place in the summer of 1969—to life with a treasure trove of archival footage that, until now, had never seen the light of day. Alongside a series of interviews and contextualization of the time period, it puts a music festival that was just as important as Woodstock (but was largely forgotten) back into the spotlight.

Summer of Soul (…Or, When the Revolution Could Not Be Televised) is an attempt to rectify that omission from music history. In his directorial debut, The Roots’ Ahmir “Questlove” Thompson gives viewers a concert documentary for the ages. But Summer of Soul isn’t just a glimpse of what it would’ve been like to attend the Harlem Cultural Festival: It also contextualizes those concerts to show us why the festival was so vital in the first place.

Why did it take so long for most of us to finally see the footage from the Harlem Cultural Festival? Well, it wasn’t for a lack of trying. Hal Tulchin, a longtime producer and filmmaker, was tapped to film all six weekends of the festival, which he recorded on videotape with four cameras. Initially, the footage aired on a local New York City station as part of a series of specials that aired during the summer of 1969.

But after that? Tulchin, who died in 2017, would spend much of the rest of his life trying to garner interest in the festival’s footage and was met with disinterest. No matter how much Tulchin tried to get someone to bite, it didn’t work. Tulchin tried to sell it as “Black Woodstock,” named after the festival that took place over a handful of days at the tail end of the Harlem Cultural Festival, to no avail.

“It didn’t help,” Tulchin lamented of rebranding the festival. “Nobody was interested in a Black show. Nobody. Nobody cared about Harlem.”

All in all, Questlove—who happened upon a few minutes of a performance from the Harlem Cultural Festival when The Roots visited Tokyo in 1997 but wouldn’t learn the full context of what he had seen until two decades later—would sift through 40 hours of footage that Tulchin shot and he and his crew would meticulously restore before it was edited down to its nearly two-hour runtime. It’s interwoven with interviews from many of the people who attended it both on the stage and in the crowd, some of whom were immediately transported back after being shown the footage; one person, who watched it in awe, had wondered if they had imagined being there.

Stevie Wonder, whose performance opens the film and shows the singer, then just 19, playing the drums on a stage set up in Mount Morris Park (now Marcus Garvey Park), said that he “could feel the energy of so many people” on that stage. For the group The 5th Dimension, watching their old performance of “Aquarius/Let the Sunshine In” was an emotional experience. They were often perceived as not being Black enough or as a white-sounding Black group, so they came to Harlem because “we wanted our people to know what we were about.”

“It was like nothing I’d ever felt before in my life,” Musa Jackson, who was only 5 when he attended the festival, said. “Before that, the world was like black and white. The concert took my life into color.”

Organized and hosted by the promoter Tony Lawrence (who had put on smaller iterations of the festival in 1967 and 1968), sponsored by Maxwell House, and supported by New York City Republican mayor John V. Lindsay, the 1969 festival was viewed, in part, to quell potential rioting in Harlem more than a year after Martin Luther King Jr.’s assassination. The Black Panther Party provided security—to protect concert-goers from the police. Reverend Jesse Jackson spoke to the crowd, and at one point, when the festival coincided with Apollo 11 landing on the moon (the same day that Wonder performed), concert-goers criticized the U.S. government for spending so much money to send a man to the moon when the money could’ve been better spent aiding its poorest citizens.

But the Harlem Cultural Festival was also a jubilant celebration with some of the biggest Black musicians in the country including the likes of Sly and the Family Stone, B.B. King, and Gladys Knight & The Pips. A duet of “Precious Lord” between Mavis Staples and Mahalia Jackson, the latter who would sing the song to King over the phone and wasn’t feeling well on the day of the performance, floored the crowd. Nina Simone, whose performance closes out the film, offered a message that will stick with you long after the credits roll.

The narrative beats of Summer of Soul don’t match up with the actual festival’s lineup, but Summer of Soul doesn’t need it to for it to work. It draws you in with its vibrancy, color in the sets and outfits worn by the singers, and impeccable sound. It’s a wave of nostalgia for older viewers, and perhaps for some younger viewers, a rolodex of musical recommendations. It’s an incredible testament, one that could potentially one day open the gates to telling even more of these stories.

And while the 1969 Harlem Cultural Festival looked as though it would’ve been lost to time, Tulchin’s wish finally came to pass: The footage is finally out in the world. Instead of being forgotten, as it had been for so long, the festival has now been immortalized.

Summer of Soul is now out in theaters and streaming on Hulu.