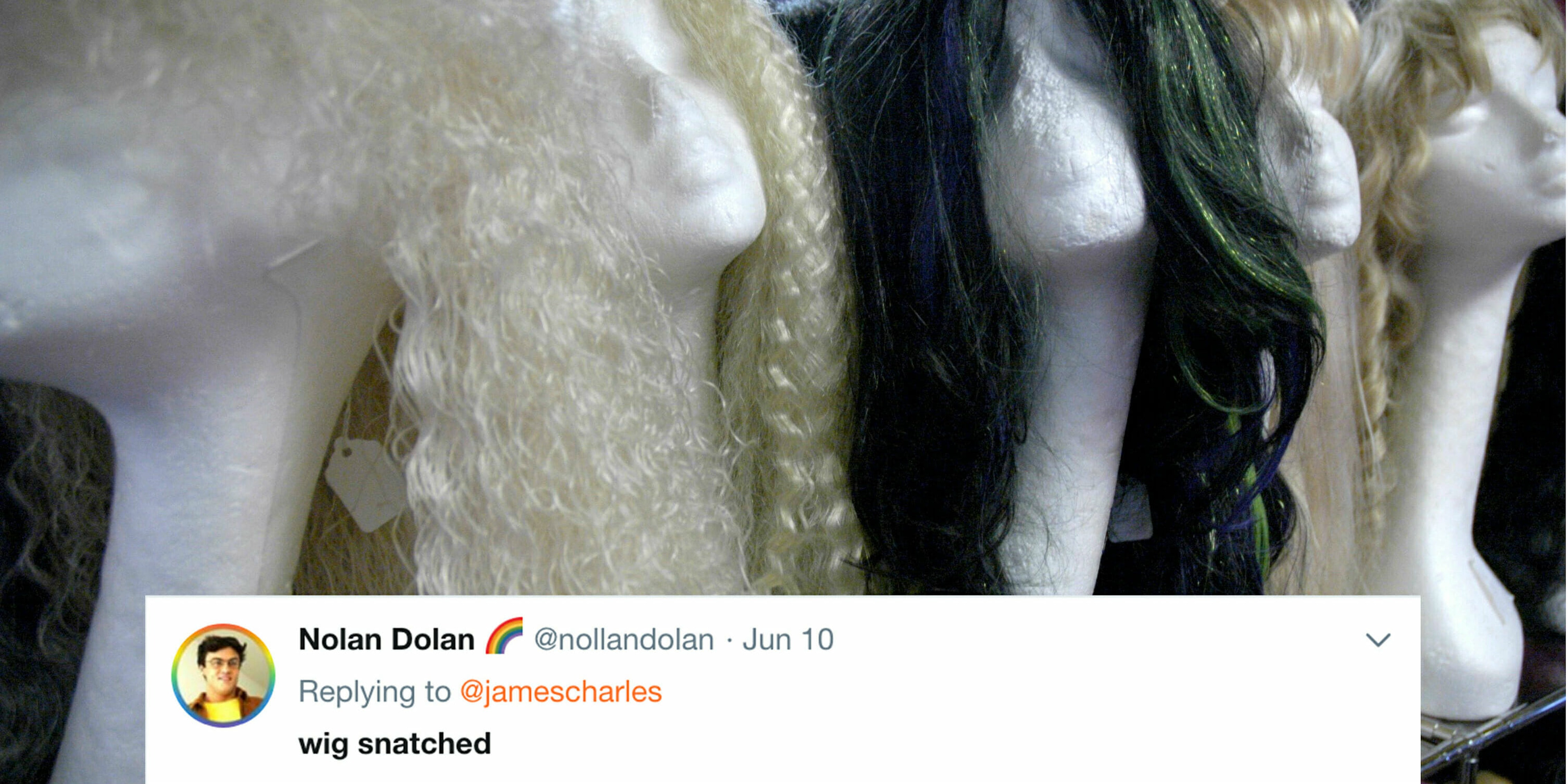 What the heck does ‘wig’ mean these days?

A history of its origins and transcendent rise to social media ubiquity.

More than just a one-off term for members of niché corners of social media, the phrase packs its own punch as a source of unification and community. Wig is not just an accessory—it’s a feeling.

As modern social media slang, the word “wig” is simply a synonym used by members of stan culture for being enamored or shocked with any event so much that your proverbial hairpiece is thrown off of your head. That’s right, my wig flew.

What started as a term used to describe Black hair was coined by members of the Black ballroom scene as a term of endearment and praise. Similarly, the term has made its way online as a phrase that glorifies artists and celebrities alike, and now we can’t get enough.

What does wig mean?

What began as a term used to describe certain hairpieces has become a cultural phenomenon.

As you’re probably most familiar with the word, a wig is a hairpiece that people use to alter the hairstyle that they already have. They come in many different colors, textures, lengths, and styles. Wigs also come as a staple beauty product for African-American women, specifically. For Black hair textures, wigs are often used as protective styles that promote growth and healthier hair by shielding new growth from heat or chemical damage.

Hair has historically been woven into the fabric of Black culture—cornrows and afros standing tall as political and social symbols of liberation and freedom throughout the civil rights and Black power movements through today. Colin Kaepernick, for example, grew his own fro out after taking a knee during the national anthem in protest of police brutality.

So wig, as it is used online today, is originally a slang word coined by participants in Black ballroom culture, in which Black LGBTQ communities gather for special events called “balls.” The subculture is characterized by its glamor, including eye-catching clothes, stylistic dancing, and of course, statement-making hair. Many participants often use extensions or extra hair pieces as parts of their looks to catalyze the visual appearance of their walks. In these walks, voguing, a house dance that grew out of Harlem’s ballroom scene, takes place in pursuit of prizes or titles. Other popular phrases such as “yaaasss,” or “sis,” are similarly rooted in the language of the community’s participants.

Katy Perry and the rise of wigs

According to Know Your Meme, what started as one small piece of African-American Vernacular English (AAVE) was translated into a commonly used slang term by the hands of pop music fans online who began using the word “wig” as a complementary response to the accomplishments of their favorite artists. New music video release? Wig! Stunning Instagram post? Wig! An album hits the charts? WIIIIIIIIIG!

Pop songstress Katy Perry is credited with bringing the word to mainstream consciousness after she used it in praise of a contestant on American Idol earlier this year. After a contestant casually dropped the word in talking with Perry and the other judges, she replied with excitement, explaining that she “feels” wig and that the word is simply language that normal folks and the other judges simply can’t understand. The moment instantly became the source of a staggering flurry of memes and fan reactions.

In fact, the search term “wig slang” hit its peak frequency just a short while after her viral moment.

Thus, the term has resurfaced as just one piece of coded jargon often used by stan or fandom Twitter, which often intersects with LGBTQ communities that have made the word “wig” a commonplace term based on its roots in their subcultures.

But, the slang is new to the mainstream. It’s understandable that many may be lost when people are referencing what’s only been known as a hairpiece for years. Kim Kardashian even got caught up in the wig confusion after fans commented on a post of her new hairdo with “wig” and she responded saying “Why would I lie about wearing a wig? This is my hair. There is no wig. I dyed my hair guys. It’s like…how is it such a crazy thought. Get the fuck out of here with that wig shit.”

Popular YouTuber Ricky Dillon described wig in a March tweet. Dylan wrote, “It’s basically like you’re shook. Like something exciting or crazy just happened that made you so shocked that your wig flew off so in short: wig… But if you wanna spice things up you can add an action after that’s a synonym for flew or gone. For example: Wig incinerated.”

Urban Dictionary also attributes him with one of the most accurate descriptions of the word out there. The first definition for wig’s new connotation dates back to 2017, where it is described as a word to be used “when someone does something so good that they go bald.” Other definitions from the early 2000s draw connections of “wig” to the phrase “wig out,” which has been a commonly used hyperbole for decades among English speakers.

So there you have it, the history of wig and its transcendence into a millennial term of praise and admiration. Happy wigging!