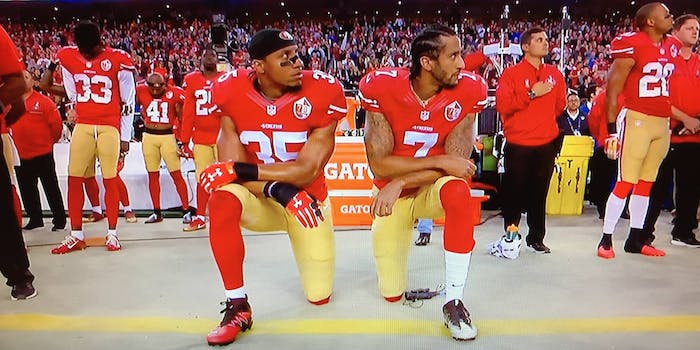 Colin Kaepernick is not backing down.

Minutes before the San Francisco 49ers took the field in their NFL season opener vs. the Los Angeles Rams, quarterback Colin Kaepernick kneeled once again during the playing of the national anthem. And on Monday night, he was joined in his protest by more of his 49ers teammates—and by two of his opponents.

Kaepernick and other 49ers teammates making their silent protests. pic.twitter.com/qj6NrUA7Dc

Kenny Britt and Robert Quinn with fists in the air during the national anthem. pic.twitter.com/xQYNfGLXce

Ever since Kaepernick sat during the “Star-Spangled Banner” last month, saying afterward, “I am not going to stand up to show pride in a flag for a country that oppresses black people and people of color,” he’s been condemned by Donald Trump and received support from a number of veterans and President Barack Obama.

Though many NFL fans have burned his jersey in protest, many others have bought it, making Kaepernick’s jersey number the best-selling apparel in the entire league. As other players have stood with Kaepernick by kneeling, the 49ers backup quarterback has promised to donate $1 million to community organizations.

Immediately after the anthem was completed Monday, Kaepernick and Eric Reid, who was kneeling next to him, hugged each other. The other 49ers with their arms in the air were Antoine Bethea and Eli Harold.