Bae isn’t dead, no matter what the haters say

It seems like every week there’s a new “bae” controversy taking over the internet. We’ve seen #StrandedBae, the complicated Twitter saga of a woman abandoned at the airport, and #HurtBae, a viral video in which an ex-boyfriend explained without remorse why he cheated on his girlfriend. If you’re still asking anyone “But what does Bae mean?” you’re a little behind the times.

It’s a versatile term tossed around casually on Twitter and by mainstream media, referring to everything from the cutest kid in school to the most beautiful slice of pizza someone has ever seen.

Trend words come and go, so it’s easy to miss the meaning of one every once in a while. If you are too late to ask your friends what it means, we’ve broken down everything you need to know about the word bae.

What does bae mean?

The origins of bae

Bae was first introduced in 2013 and people really didn’t know what it meant, especially in Wisconsin, the state that Googled the term the most. From first-hand experience, I can say it might even be reasonable to assume everyone was abbreviating Beyoncé’s name a little differently.

According to Urban Dictionary, the word bae is Danish for “poop,” but it first came into popular usage as an acronym for “before anyone else.” That’s why it’s often laced with territorial and passionate feelings. 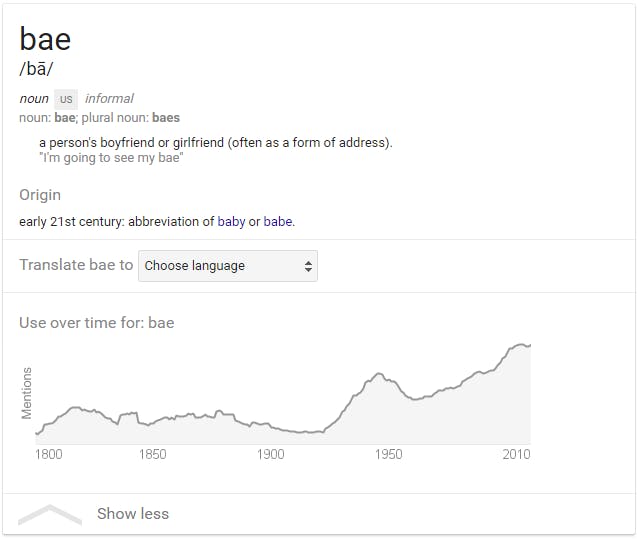 Bae is a better known, however, as a hybrid of “baby” and “babe,” and it’s used as an endearing term towards someone or something you love like a boyfriend or girlfriend. For example, when someone says their bae just texted them, that is most likely their ride-or-die or person of interest, and if someone refers to food as bae, you better not even think for a second you might be able to snatch a bite of it.

Lesser known to the general population is the acronym “before anyone else” otherwise known as “bae.” Not everyone uses bae or believes bae is an acronym, but it’s fairly self-explanatory. 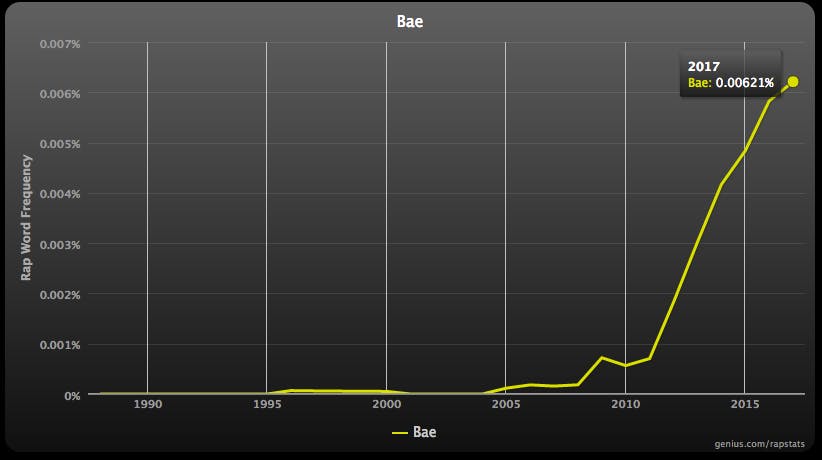 Sure, the term became more culturally relevant to the mainstream in the last 7 years or so, but “bae” has long been prevalent in hip-hop, appearing in rap songs since 2005. It really took root in a wider audience with Pharrell’s “Come Get It Bae” in 2014.

Within meme culture, you’ll see “bae” most often in popular phrases like “When bae catch you slippin” and “When bae says her parents aren’t home.”

The right way to use bae

The correct way to pronounce “bae” is just like “bay,” and even though some consider it an acronym, it’s not usually capitalized.

The word is used as a noun, and it’s sometimes used to claim interest on someone or something by saying “that’s BAE.” It’s also acceptable to just blurt “bae” out with an unenthused voice just to get your point across, or cry “Ugh he’s so bae!”

In case you need assistance, here are a few tweets to get you into comfortable with the vernacular:

when someone has so much potential to be ur bae but they are dumb pic.twitter.com/xm4ePPBmjn

How it feels waiting for bae to text you back.. https://t.co/4CreiANzFF

People also use the word bae for things other than humans they would one day like to cuddle with.

Many could argue that this word is overused, but maybe they just don’t understand the acute significance behind putting someone before yourself, unless it’s a slice of pizza.