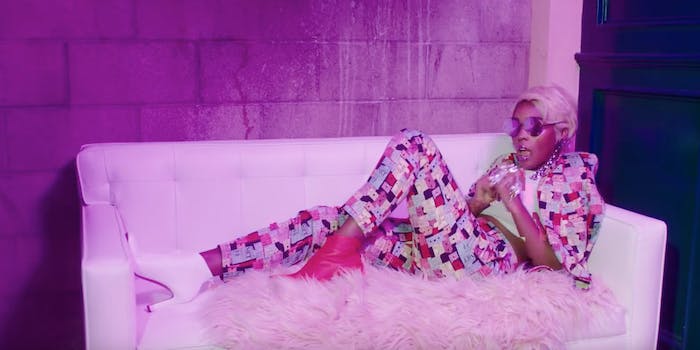 Janelle Monáe’s new video for “Make Me Feel” is a celebration of bisexuality, showing her caught in a tug-of-war between a hot guy and her rumored girlfriend, actress Tessa Thompson. It also makes prominent use of “bisexual lighting,” the multi-colored neon style that’s having a huge moment right now.

Janelle Monae with an important addition to the bisexual lighting cannon. pic.twitter.com/UpqAmFZjZY

Although it may have just peaked with “Make Me Feel” and the resulting rush of coverage from pop culture outlets, bisexual lighting has been a “thing” for some time now. The color scheme—hot pink, royal blue, and purple—comes from the bisexual pride flag. Designed in 1998 by Michael Page, the colors in the flag represent heterosexual attraction (blue), same-sex attraction (pink), and attraction that’s anywhere along the spectrum (purple). A few years ago, a Tumblr post argued that using these colors in a scene on Sherlock possibly hinted that a character on the TV show was bisexual. But the term didn’t really take off until last year, when it started popping up on Twitter.

Bisexual lighting was recently seen in the ’80s-drenched “San Junipero” episode of Black Mirror, which centered on a romance between two women, at least one of whom was bi.

And it has appeared in several more movies, TV, and music videos from the past few years:

Here’s a short video of roman in bisexual lighting pic.twitter.com/fecOvoeoLD

the bisexual lighting in japanese breakfast's video for boyish is iconic pic.twitter.com/QndRE7PUVz

RuPaul’s Drag Race busted out the neon lighting just this past week for its season 10 “Meet the Queens” video:

The neon color combo is also commonly used as visual shorthand for “cyberpunk,” in the 2018 interpretation of a ’90s genre:

And, as it turns out, it’s the key to taking a photo of a single atom:

Did the aesthetic or the cultural significance come first? It’s hard to say, but it seems like the color combo started appearing in popular media before internet commentators applied the “bisexual” analysis. Now the term “bisexual lighting” has stuck, and innovators like Janelle Monáe are invoking it more explicitly.

To be clear, “Bisexual lighting” isn’t meant as a shady or derogatory term. Plenty of bi people on Twitter have embraced it and are happy to claim the aesthetic as their own. When the story of bisexuality has often been the story of bi erasure, it’s refreshing to see the dominant lighting aesthetic of the moment explicitly branded “bisexual.”