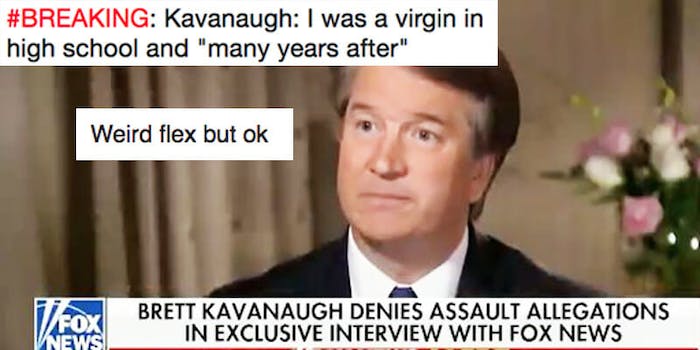 This might make you think twice before low key bragging.

We all know what it means to flex. Not in the literal sense of the word, which is to “move or tense a muscle by contraction,” but the slang definition that means to “stunt or show off,” according to Urban Dictionary, and which gained mainstream popularity through rap music. So by proxy, “weird flex” would logically refer to something odd or questionable to brag about.

And that brings us to the latest evolution of lingo taking over the internet: “weird flex but ok.” Essentially, you could say it’s like the phrase equivalent of Jim from The Office cocking his head and squinting his eyes with a tight-lipped smirk into the camera.

The phrase began popping up here and there on Twitter over the summer, as you can see in a handful of examples below.

This dude is the definition of “weird flex but ok” https://t.co/X9NWkbv1Jv

The phrase didn’t really go viral, however, until earlier this week when YouTube personality Sarah Schauer used it to make a joke about U.S. Supreme Court nominee Brett Kavanaugh telling Fox News that he was a virgin in high school and “many years after.”

Kavanaugh made the odd claim to refute allegations that he had attempted sexual assault on accuser Christine Blasey Ford at a party in high school, and exposed himself to another woman when he was in college. The punchline, of course, is that neither woman alleged that Kavanaugh had intercourse with them—forced or otherwise—which made it sort of eyebrow-raising information to volunteer.

Now it’s safe to say that “weird flex but ok” has become fully ingrained in the lexicon of the internet, as you can see in some of the recent examples, post-Schauer’s tweet.

Me: I've ridden this many roller coasters and know a lot of facts about theme/amusement parks

Everyone: weird flex but ok

And then there’s this timely example, that roasted President Trump getting laughed at by world leaders during his United Nations General Assembly speech on Tuesday:

The UN: weird flex but ok

Or this one, making fun of Lil Xan’s Hot Cheetos overdose hospitalization:

Some people are saying “odd flex” instead of “weird flex,” but the message is still the same.

So next time you catch wind of someone low key bragging about something they shouldn’t be, hit ’em with one of these. Friends don’t let friends “weird flex but ok.”