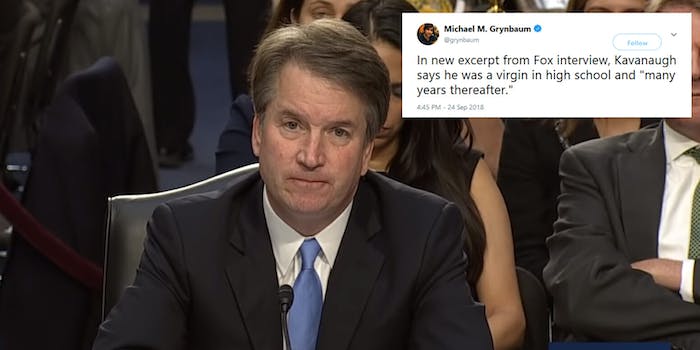 Brett Kavanaugh will appear on Fox News on Monday night to speak directly to the public following two accusations of sexual misconduct that have cropped up as he seeks a seat on the U.S. Supreme Court.

According to the New York Times and CNN, one of Kavanaugh’s defenses against the accusations will be that in high school, he was a virgin.

In new excerpt from Fox interview, Kavanaugh says he was a virgin in high school and "many years thereafter."

This is quite the exchange between Kavanaugh and Martha MacCallum: pic.twitter.com/4q8moIljnH

It’s a questionable defense because, for starters, neither of his accusers have said intercourse occurred during their interactions with him, so that doesn’t absolve him of anything at all. Many people noted this point on Twitter.

Kavanaugh has been accused of exposing himself to one woman and pinning another down while trying to disrobe her.

Being a virgin wouldn't disprove either of those allegations. https://t.co/oqztw1RpYY

This, on its own, disproves neither claim. https://t.co/gpPFyTERap

Also, many young men who haven’t had sex are associated with groups that are extremely disrespectful toward women.

While Kavanaugh did not come of age during the internet, many other young men who were virgins did, and they built and maintain a toxic online community rife with misogyny that has occasionally spilled over into violence. It’s all centered around the fact that they aren’t having sex.

There’s a whole word for it: Incels, short for involuntarily celibate. The incel community is exactly the kind of community you don’t want to ally yourself with when you are being criticized for your behavior toward women.

But following the news of Kavanaugh’s latest defense, many on Twitter pointed out that calling attention to his being a virgin will unintentionally align him with self-identifying incels who use their virginity as an excuse to demonize and promote violence toward women.

I am so shocked to learn that Kavanaugh was an Incel.

So, Kavanaugh is basically using incel / "nice guy" rhetoric to explain why he's NOT a sexual assault-committer?

Incels widely believe that women owe men sex and have extremely retrograde views on consent. The group is notorious for their hatred of women, and one of their most famous self-identified members, Elliot Rodgers, went on a killing spree after being rejected by a woman. The behavior of incels on Reddit was so noxious that their forum was permanently banned.

Kavanaugh isn’t saying he holds these views, but the claim that he was a virgin is a weird way to convince the world at large that he has a healthy relationship with sex and women. Kavanaugh, who infamously was extremely interested in graphic details of Bill Clinton’s sex life during his perjury investigation, just might not.

The full interview of Kavanaugh and his wife Ashley with Martha MacCallum will air on Fox’s The Story at 6pm CT on Monday.