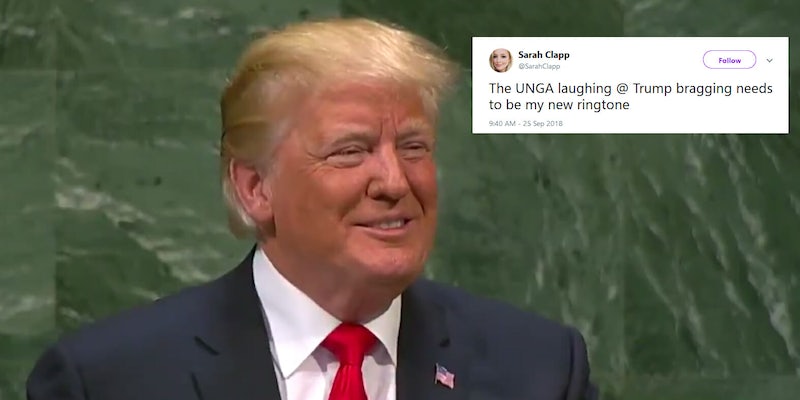 The president said he 'didn’t expect that reaction.'

President Donald Trump repeatedly says “the world is laughing at us” when bashing his political rivals or ideas that go against his agenda.

On Tuesday, some of the world’s most prominent leaders actually laughed at him.

Trump, speaking before the United Nations General Assembly today, began his speech by patting his administration on the back, touting the fight against the so-called Islamic State and America’s economy, among other things.

“In less than two years, my administration has accomplished more than almost any administration in the history of our country,” the president began, hearing rumbles of laughter.

“America is–so true,” he said, smiling and pausing for more laughter from the General Assembly. “Didn’t expect that reaction, but that’s OK.”

The crowd clapped, and laughed harder, after Trump’s quip.

President Trump at @UN General Assembly: "In less than two years my administration has accomplished more than almost any administration in the history of our country…so true."

Trump has, in the past, warned that the country needed a president who was not “a laughing stock to the entire World” in a 2014 tweet, referring to former President Barack Obama.

“We need a President who isn’t a laughing stock to the entire World. We need a truly great leader, a genius at strategy and winning. Respect!” Trump wrote.

We need a President who isn't a laughing stock to the entire World. We need a truly great leader, a genius at strategy and winning. Respect!

Given the laughing that occurred on Tuesday, the president’s old tweet quickly made the rounds online.

Even former Vice Presidential candidate Sen. Tim Kaine (D-Va.) got in on the joke.

The laughing was quite a contrast to last year, when the president threatened to “totally destroy” North Korea during his speech to the United Nations.  Since then, Trump and North Korean leader Kim Jong-Un held a summit and signed an agreement that aims to denuclearize the Korean peninsula.

Of course, the visual of world leaders laughing at the president’s claims caught the eye of people on Twitter.

In the studio listening to Donald Trump’s speech at #Unga. I’ve covered a number of these events – never ever heard world leaders laughing at another leader, never mind the American President. pic.twitter.com/g6GxsrE2xA

Trump starts #UNGA speech by saying his administration is the best in "history of our country." It is met with a round of laughter. They are not laughing with him. #MAGA

They're not laughing with you. #Trump #UNGA

The world is literally – and I don't ever use that word lightly – laughing at us because of Trump. #MAGA #UNGA

The UNGA laughing @ Trump bragging needs to be my new ringtone

Trump now knows what it feels like to have the world laughing at you: #UNGApic.twitter.com/SsD11pcHhc

#UNGA #Trump #TuesdayThoughts
They are laughing at you Trump. pic.twitter.com/DSwqwldPle