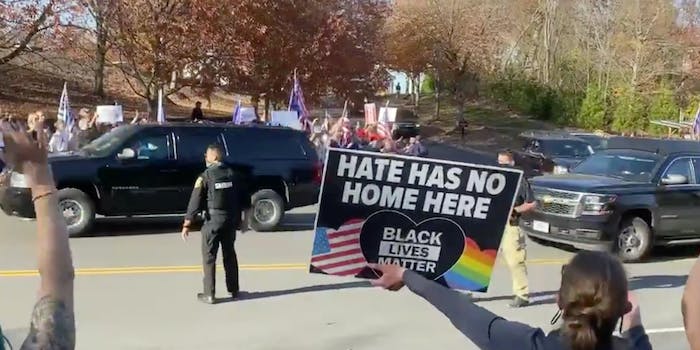 Trump was greeted by Americans celebrating his loss on his way back to the White House from golfing.

It has not been a good day for President Donald Trump.

After several days of ballot counting, the media called the presidential election in favor of Joe Biden, with both the Electoral College and the popular vote proving that the majority of American voters are ready for change.

Trump was golfing when Biden’s win swept across the nation Saturday morning, and his eventual return to the White House was met by scores of people out celebrating the results of the election.

One particular photo by Alex Edelman captured Trump’s face as his motorcade drove past the crowds, and Trump got to see firsthand just how thrilled many people are with his loss.

The picture shows a distraught-looking Trump, huddled up against the glass of the vehicle, perhaps getting a taste of what his post-presidential life may look like.

The photo clearly resonated with the president’s detractors, quickly going viral as folks on Twitter continued in the celebration of his loss and the possibility that reality may finally be setting in for Trump, who has thus far continued to falsely claim that he has, somehow, won the election after all.

Photos and videos of the celebrations happening outside the White House have overtaken social media, with many others proving to be just as symbolic of the feelings sweeping through over half of voters in the United States.

But a one-term president finally faced with the hard truth that he does not, in fact, have anywhere near the majority behind him may very well go down as one of the most memorable images from this day.