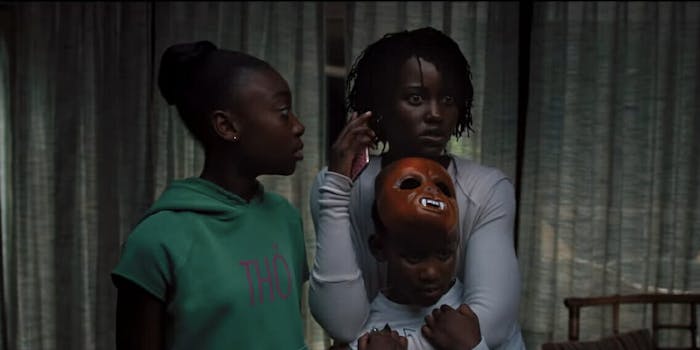 Jordan Peele’s ‘Us’ is already a meme gold mine

For such a terrifying flick, the memes are hilarious.

Some of these memes contain spoilers for Us.

The internet has been waiting for Jordan Peele’s Us since its poster was released. Following Thursday night’s first screenings, which resulted in ample reaction memes overnight, we can see why the film may surpass its success at the box office while scaring—and puzzling—moviegoers.

The movie revolves around a family of four (played by Lupita Nyong’o, Winston Duke, Shahadi Wright Joseph, and Evan Alex) which goes on a beach trip, only for things to take a horrifying turn when their doppelgängers show up outside their vacation house, trying to kill them. While it’s easy to assign the meaning “we are our own worst enemies” to its premise, there’s a lot more to this film that will take moviegoers a while to digest, as stated in the Daily Dot’s review.

Yet the many interpretations one can put upon it only intensified its appeal, and this movie is set to rake it in the box office. Box Office Mojo posted that the movie is “looking at a $50M+ opening weekend.”

“The Universal and Monkeypaw Productions release is tracking to take in anywhere from $38 million to $48 million after staging a buzzy premiere at SXSW. Some analysts believe the film could approach, or even cross, $50 million,” according to the Hollywood Reporter.

Its box office success is reflected in all the Twitter love it’s been getting, as it trended during its Thursday night’s first public screenings. Moviegoers also took to Twitter to express their love for the story, directing, score, and acting—especially that of Nyong’o. User @bradmiska called it “an instant classic that we’ll be talking about for years.”

There’s so much to unpack in #usmovie that I’m going to be digesting it for the next few days. It’s one of those movies we can’t really talk about without spoiling everything, but it’s an instant classic that we’ll be talking about for years. pic.twitter.com/sj41y6DbWQ

Meanwhile, @cinemaniac94 declared it “My favorite movie of the year so far!”

I just watched #UsMovie for a second time and wowsers!!! It’s a masterpiece. Genius on so many levels. It’s like a giant #EasterEgg hunt inside of a horror film.

It’s a totally different movie the second time around. pic.twitter.com/bqb0eByxh3

Holy cow, #UsMovie is quite a ride – terror, suspense and comedy, wrapped in mystery and style. Jordan Peele is exactly what Get Out introduced us to – one of the most exciting filmmakers working today. I’m anxious for a second viewing (and a third Jordan Peele movie). pic.twitter.com/dCgoysm8El

The #UsMovie hashtag even got its own scissors Twitter emoji—it’s a key symbolism in the movie, among many that people have tried to decode and put meaning to.

#UsMovie has taught me that scissors are the ultimate ironic symbol. They are two symmetrical sides united for a single purpose—to divide. pic.twitter.com/gjXS4nkoDQ

There are many interpretations behind the meaning of the film (here’s a spoiler-filled one), and people were quick to share their own theories on Twitter. @undsptdphotos thinks it’s a “metaphor for poverty.”

It explains how the movie may be a metaphor for poverty. Mind blowing stuff. pic.twitter.com/Q4fUe9cu4d

Each group of people are pointing fingers at another group & blaming them for the problems in the country but as #UsMovie depicts so vividly..when u point fingers u have three pointing back at u. We, as Americans, are to blame. It's US. Ourselves to blame. I love Jordan Peele

The best thing about the #UsMovie thread? The memes are a hoot, whether or not you’ve seen the horror flick. And if you’re still psyching yourself up because you’re too chicken, the memes just might convince you to watch. The spoilers without context are especially hilarious.

The characters’ key scenes and actions proved to be a meme gold mine. “Lupita Nyong’o getting in the car at the end of #UsMovie like,” @goodnightharlem posted.

Me when I see my ass being followed by myself #UsMovie https://t.co/gfqHc15JgI

Zora with the golf club protecting her family #USMovie https://t.co/d6oAPGgde0

The best memes are people’s reactions after seeing the movie, especially when they walk past a mirror, as @blaquimoon tweeted:

This is all I could think of during the boat scenes #UsMovie https://t.co/5zLGAaUxIm

These users are mind-blown.

It wouldn’t be a giant cultural event without a SpongeBob meme.

We love how user @xspiritdesirex is already thinking of Us-themed Halloween costumes for this year:

So we all doing red jumpsuits, scissors , and sandals for Halloween costumes or what ? #UsMovie

We thought Us was compelling enough to post a huge opening weekend. Now that there are memes, there is little doubt about it.