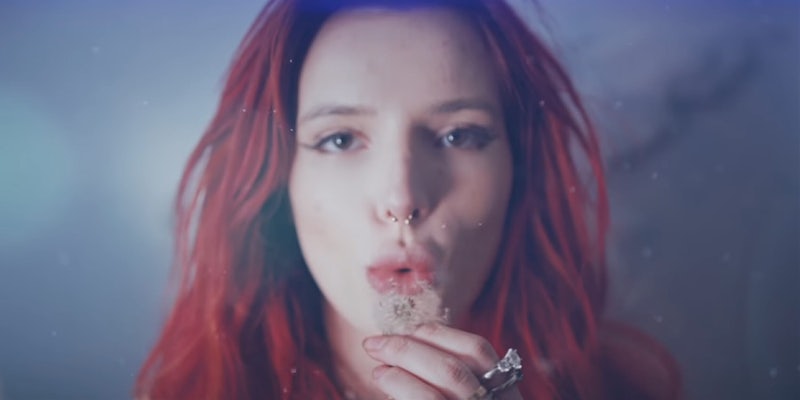 TikTok is full of curious memes and pop-culture mutations, and it was probably only a matter of time before Bella Thorne was involved in one.

As detailed by Know Your Meme, the actor/singer’s 2018 single “Bitch I’m Bella Thorne” has made its way onto the app, as the soundtrack for a series of videos that seem to be mocking or parodying Thorne’s dyslexia. In 2012, when Thorne was still on Disney Channel series Shake It Up, a PSA about her struggle with dyslexia was uploaded to YouTube and became a meme on its own. That audio made its way to TikTok as well, and the compilation below documents some of the creative takes on the commercial, like users opening books or drinking water the wrong way.

In another mutation, users do things like sit on chairs or walk through doors the wrong way, soundtracked by “Bitch I’m Bella Thorne.” That audio clip has been used in more than 89,000 videos so far.

It doesn’t appear that Thorne has directly addressed the meme, or whether she thinks it’s mocking people with dyslexia, but parents have apparently been tweeting at TikTok asking them to remove the audio clip since at least January.

My 10yr old daughter is dyslexic. Recently, we've worked hard on her confidence, convincing her it's not something to be ashamed of. Now, thanks to seeing memes on @tiktok_us where people use the Bella Thorne sound clip to mock & ridicule dyslexia, she is really upset & I'm livid

Thorne, in the meantime, has been pouring beer on her hair. Only time will tell if that’s incorporated into the meme.