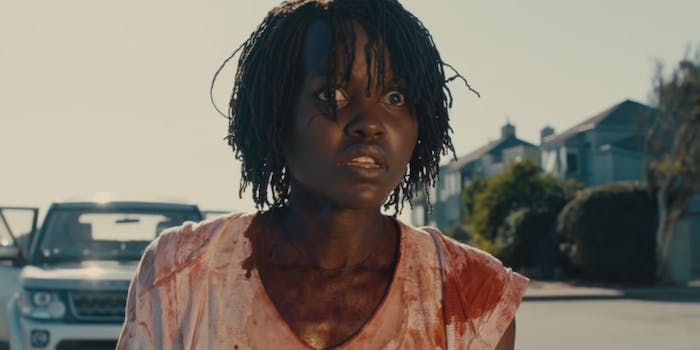 At SXSW, another thrilling horror ride.

Jordan Peele made a This Is Us joke before the SXSW premiere of Us, his second feature film. But “this is us” is kind of an apt descriptor.

Us opens in 1986, with Lupita Nyong’o’s character Adelaide as a child; she’s watching TV, and a Hands Across America commercial plays. Later, she wanders off from her bickering parents and into a mirrored funhouse that suggests you can “Find yourself.” And she does.

This sets up the present-day Adelaide, who is now married to Gabe (Winston Duke) and mother to Jason (Evan Alex) and Zora (Shahadi Wright Joseph). The Wilson family is en route to a beach vacation in Santa Cruz, where they meet up with friends the Tylers (Elisabeth Moss and Tim Heidecker) and their twin daughters.

Recent movies, like Cam, have explored the doppelgänger in unique ways, but Us lays out an ambitious mythology, and the middle act is its strongest. When a family that looks just like the Wilsons shows up at the vacation house, dressed in red jumpsuits, Us veers into home-invasion thriller but Peele isn’t going for Funny Games here. The family and their doubles are split off into four storylines, playing on the fears and doubts of each character. We’re told that this is the “untethering,” and their stunted doubles have the scissors to prove it. When Adelaide asks her double “Who are you?” she’s told, “We’re Americans.”

Sure, that’s a bit heavy-handed, but Us is also very funny, with all four family members interacting and riffing in a way that reminds us that Peele gets the best out of his actors and also knows when to pull back. A scene in which the family argues about kill counts is peak Peele. He’s a master of pop-culture and horror iconography (as witnessed by his upcoming reboots of Twilight Zone and Candyman) and Us uses background and foreground expertly to elevate tension, especially in a later scene in which Adelaide has a final confrontation with her double—one that reminded me of the face-off Natalie Portman has in the final act of Annihilation. Nyong’o is incredible, her ascent from quietly traumatized to bloody vengeful seamless and unsettling.

In the third act, however, Us starts to fracture under the weight of all its ideas. As we start to see the “untethering” happen on a larger scale, the denouement becomes a little unfocused. By the time the final shot is revealed, I wasn’t sure I was still watching the same movie.

But Us is still going to be a hit, and it will resonate with viewers in different ways. (There was quite a bit of laughter during the screening, and one particularly tense scene elicited a “Bitch, run!” from an audience member.) Us will, of course, be compared to Peele’s 2017 debut Get Out, which arrived at just the right time and sparked countless thinkpieces, theories, and conversations. As with Get Out, Us plays with the idea of privilege and domesticity, and trades out the trauma of the Sunken Place for a shadow world, “as above so below” writ large.

Peele, in a post-screening interview, said this movie was bigger than just race. Us is about “this country” right now. “We’re in a time where we fear the other,” he said, citing the “mysterious invader” we think will take our jobs or people with different political views than us. The “monster,” he suggests, “has our face.” This is us.