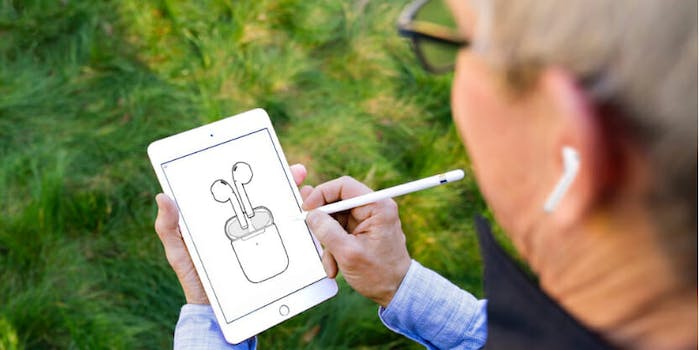 Tim Cook turns his iPad meme into an AirPod meme

Tim Cook—not to be confused with Tim Apple—completed the internet cycle this week by re-memeing a meme that he created.

It was a beautiful moment.

The Apple CEO took to Twitter Monday morning to post a picture of himself writing on an iPad. In the original tweet, Cook wrote a simple “hello” for his followers to enjoy. It’s placement on a blank white surface, however, made it prime memeing material. In no time, alternate versions of the picture were all over Twitter.

Things continued in due internet course. The meme momentarily blew up, dominating Twitter for a few short hours before diminishing into obscurity. It would likely have faded into the historical dredges of internet trends if Cook hadn’t brought it back around.

In another early morning tweet three days later, Cook tweeted the same picture with two minor changes. This time, the iPad had a sketched picture of Apple AirPods in place of the original “hello.” On top of that, a subtle AirPod could be seen in his left ear.

He meme’d his own meme. Cook morphed into an internet god awash with memeable relevance, in other words, and Twitter was quick to notice.

Of course, a few people had to throw in some “subscribe to PewDiePie” memes.

One person even trolled Cook, writing “I love Samsung” on the blank template.

It was a brilliant marketing move by Cook. Sure, people are more focused on the meme than the AirPods he plugged, but the conversation is still revolving around Apple and AirPods. Eventually, the ouroboros of a meme must end, however, or everything funny about it is lost. Hopefully, Cook figures that out before he re-memes his re-memed meme—and ruins it forever.