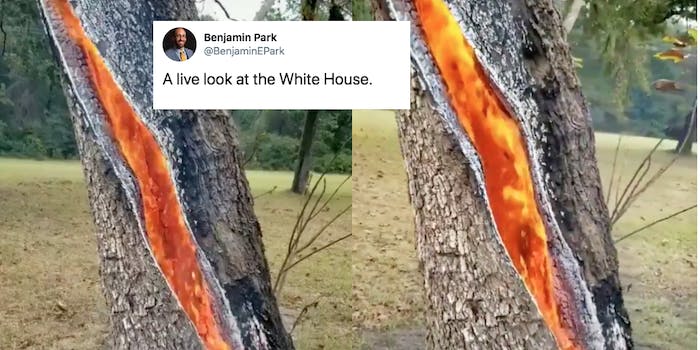 This video of a tree struck by lightning is… relatable?

'My empty stomach after eating a bag of Hot Cheetos.'

A video of a tree that was struck by lightning is going viral as Twitter users seem to find it relatable.

The video was posted by Twitter user @sofain and shows a tree that was struck by lightning burning on the inside and appearing normal on the outside.

It took less than one day for Twitter to start meme-ing the hell out of the video, and the memes illustrate that we’re all pretty similar.

“When my friends ask how i’m doing and i tell them ‘i’m fine,'” Twitter user @gnawdy wrote, along with the video. Twitter user @laibanwer equated the tree to how it feels “on the inside” when you see your crush talking to other girls.

“Me on the inside when i get jealous,” another wrote.

when my friends ask how i’m doing and i tell them “i’m fine” https://t.co/wjLsyKFha8

Me on the inside when i get jealous https://t.co/soRS6zcWq1

When you ask me what’s wrong and I say ‘nothing’ https://t.co/XnLKgVPfWi

Me on the inside when I see my crush talking to other girls https://t.co/mxsFiD4m0D

We all also seem to make poor nutritional choices, especially when it comes to Hot Cheetos. “My empty stomach after eating a bag of hot cheetos,” Twitter user
@rode0_ joked.

my small intestine trying to hold back last night’s curry and 20+oz of iced coffee while I’m stuck in a meeting pic.twitter.com/zNIDHQQ80O

My empty stomach after eating a bag of hot cheetos https://t.co/3z4TwZ6yZc

this is my sphincter after i eat too many hot cheetos https://t.co/PkuNByivzo

Another made an astute political observation. “A live look at the White House,” Twitter user @BenjaminEPark wrote.

A live look at the White House. https://t.co/mXSc8jsC7P

And, of course, the fiery inside of the tree was equated to period cramps.

this tree looks like how period cramps feel https://t.co/TLg2B2Ry8k

This video will probably continue making the rounds as users share more relatable content about suppressed emotions and spicy foods.