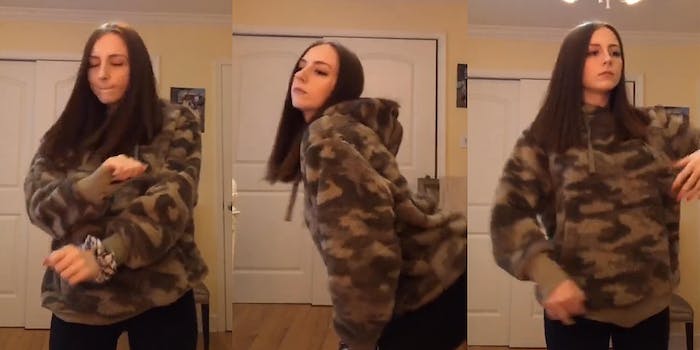 People on TikTok are subtly calling out abusive behavior.

TikTok is often viewed as a hyperchaotic incubator for inexplicable memes, but some people have used the platform’s framework to call out predatory behavior. Now a subgenre has emerged to call out shitty exes and abusive behavior.

A couple recent Twitter threads highlight some examples of this emerging trend of girls and women dancing to voicemails of their shitty exes. TikTok user @trapmoneybella posted a video titled “Day 1 of dancing to voicemails from my cheating ex boyfriend,” and then followed it up with another dance.

User @tenleyearles also used this approach, posting audio of her ex “yelling at me for wearing leggings to school.”

In a follow-up video, she offers some advice to girls on catching “red flags.” She explains she had to get a restraining order against her ex, and that during their relationship he become more controlling, going through her phone and sending people to surveil her at the school she attended.

Other users have been inspired by this trend, posting their voicemails from exes.

The Twitter threads also highlighted other instances of women subtly calling out sexist behavior, like this duet with a guy who thinks he’s got his pick-up technique all figured out.

The “Me dancing to…” meme isn’t new; it’s been used to call out racism and bad takes, but this iteration has expanded to include not just voicemails, but texts. And there are a few instances of dancing to voicemails of shitty ex-best friends, too.

While there are some jokes in the comments of these videos, there is also of solidarity and catharsis; women are seeing behavior they thought was normal or had to be tolerated and calling it out in their own lives, or offering support to others.

Ladies, if he calls you “bro,” you know where to go.