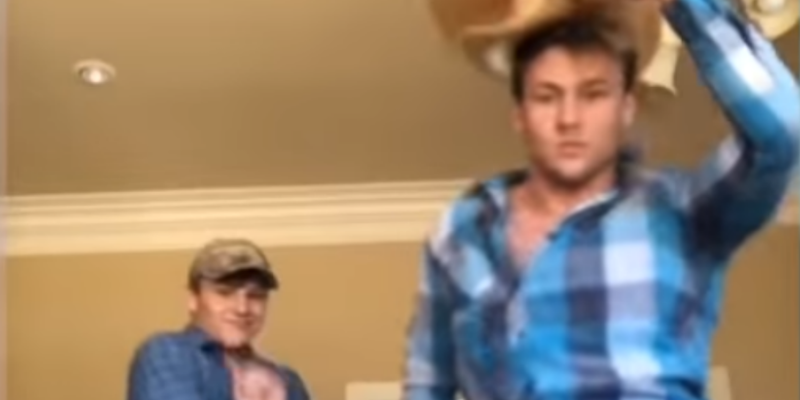 Welcome to the yee yee club.

It’s time to dust off those old cowboy boots, because the latest TikTok challenge has users goin’ country.

The video typically starts with a user drinking some “yee yee juice,” which magically transforms them from their everyday look to a bonafide cowboy, all to the tune of Lil Nax X’s song “Old Town Road (I got Horses in The Back).” Other users jump and magically take on the new “howdy, ma’am” persona.

According to Know Your Meme, the “Yee Yee Juice” challenge went viral after user @nicemichal uploaded his version, which now has over 19,000 likes, on March 8, 2019.

@nicemichal begins his video dressed in a hoodie and a pair of shorts; with one jump in the air, he transforms into a flannel-shirt-and-fitted-jeans-clad cowboy with some serious country dance moves.

Other examples have flooded TikTok in recent days.

TikTok users are following a bigger trend that we’ve seen emerging over the past few years. There’s a definite connection happening between country culture and pop culture.

Back in 2016, Beyonce’s hit album Lemonade featured the song “Daddy Lessons,” and the country influence is undeniable. She even performed the song with the Dixie Chicks at the 2016 Country Music Awards. While this isn’t the first collab between the two worlds (“Over and Over” with Nelly and Tim McGraw anyone?), others have followed suit.

While Cardi B may not have released a country-influenced song, her fashion choices look right out of Dolly Parton’s playbook during her feature in the remix of Blueface’s “Thotiana.”

And artists who have the country appeal, like Grammy winner Kacey Musgraves, are crossing boundaries as well. Musgraves is a vocal LGBTQ ally, proving that these days, country music isn’t all about guns and pickup trucks.

GIDDY UP, HENNY! @rupaulsdragrace #AllStars4 is gonna be everything this week! Don’t yee miss all the haw Friday at 8/7c on @VH1! pic.twitter.com/Mxbh1GXZQc

So, is it a trend or a movement? As Musgraves would say, welcome to the yee yee club.