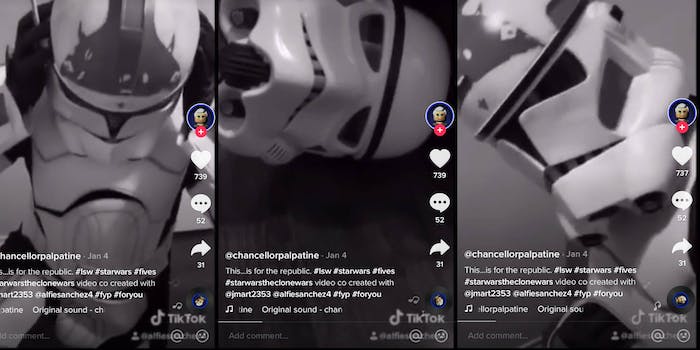 One of the most feared Sith Lords in Star Wars is taking over TikTok.

One of the most feared Sith Lords in Star Wars is taking over TikTok.

Wearing an altered storm trooper’s uniform, the Star Wars fan running @ChancellorPalpatine has taken on popular trends and put a Star Wars-spin on them. The account has garnered about 17,000 followers and 125,000 likes on all of its videos.

This first video, captioned “For The Republic,” shows @ChancellorPalpatine reacting to someone being a separatist, with comments referencing the animated series Star Wars: The Clone Wars and music from Star Wars Episode III: Revenge Of The Sith.

Other videos are made to classic Star Wars songs, such as Darth Vader’s “The Imperial March,” and go heavy on some problematic terms like “simping,” which means to place a woman on a pedestal.

Lego Star Wars is also given some time to shine on the account. In a serial duet of lightsaber TikToks, Lego General Grievous gets a feature of himself wielding four lightsabers. However, not everyone is a fan of this one.

The most recent video from the Chancellor’s account shows himself up against Marvel supervillain Thanos as Darth Maul and Obi-Wan Kenobi come to his aid–followed by an army of Star Wars characters. The comment section makes references to both the franchise and the conflict with Iran.